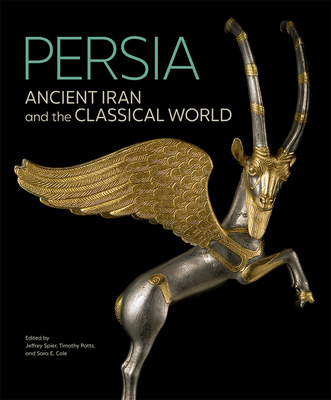 A fascinating study of Persia’s interactions and exchanges of influence with ancient Greece and the Roman Empire.

The founding of the first Persian Empire by the Achaemenid king Cyrus the Great in the sixth century BCE established one of the greatest world powers of antiquity. Extending from the borders of Greece to northern India, Persia was seen by the Greeks as a vastly wealthy and powerful rival and often as an existential threat. When the Macedonian king Alexander the Great finally conquered the Achaemenid Empire in 330 BCE, Greek culture spread throughout the Near East, but local dynasties—first the Parthian (247 BCE–224 CE) and then the Sasanian (224–651 CE)—reestablished themselves. The rise of the Roman Empire as a world power quickly brought it, too, into conflict with Persia, despite the common trade that flowed through their territories.

Persia addresses the political, intellectual, religious, and artistic relations between Persia, Greece, and Rome from the seventh century BCE to the Arab conquest of 651 CE. Essays by international scholars trace interactions and exchanges of influence. With more than three hundred images, this richly illustrated volume features sculpture, jewelry, silver luxury vessels, coins, gems, and inscriptions that reflect the Persian ideology of empire and its impact throughout Persia’s own diverse lands and the Greek and Roman spheres.

This volume is published to accompany an exhibition on view at the J. Paul Getty Museum at the Getty Villa from April 6 to August 8, 2022.

“This is a spectacular book, offering fascinating insights into three great ancient Persian empires and their interactions with Classical Greece and Rome. Groundbreaking essays by the leading scholars in the field open our eyes to how people lived and interacted, their motivations, and the outcomes of their choices. This catalogue provides detailed discussion of the hundreds of glorious artifacts brought together in the J. Paul Getty Museum's exhibition from museums across the United States, Europe, and the Middle East. The exhibition at the Getty Villa is beautifully reflected and augmented by this richly illustrated and documented volume, one that will delight and ignite the curiosity of specialists and the curious public alike. A magnificent book, worthy of the installation that inspired it!”
—Elspeth R. M. Dusinberre, College Professor of Distinction, Classics Department, University of Colorado Boulder

“In Persia: Ancient Iran and the Classical World, leading experts offer an up-to-date, highly interesting overview of the great epochs Iran experienced under the Achaemenid, Arsacid, and Sasanian dynasties. These key periods in Iranian history become palpable to a substantial extent in the political and cultural encounter with classical Greece, the Seleucid kingdom, and the Roman Empire. The different perspectives with which the individual authors look at the history and material culture open up many new perspectives, even for the specialist. The catalogue’s illustrations make the complexity of the tradition impressively visible.”