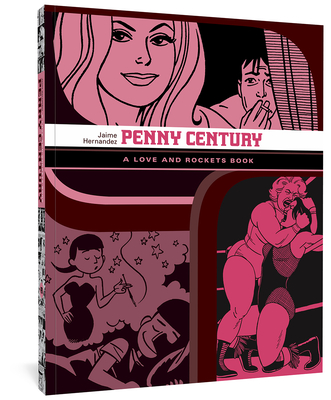 This is book number 8 in the The Complete Love and Rockets Library series.

Wrestling, romance, and more in the fourth omnibus collection of Locas stories from Love and Rockets.

The eighth volume of The Complete Love and Rockets Library is the fourth omnibus edition of writer-artist Jaime Hernandez’s Locas storyline. It starts off with a blast with "Whoa, Nellie!," a graphic novelette in which Maggie, who has settled in with her pro-wrestler aunt for a while, experiences that wild and wooly world first-hand. Then it's back to chills and spills with the old cast of Hopey, Ray Dominguez, and Izzy Ortiz — including Maggie's romantic dream fantasia "The Race" and the definitive Ray story, "Everybody Loves Me, Baby." Penny Century also features two major "flashback" stories: "Bay of Threes" finally reveals the full back story behind Beatriz "Penny Century" Garcia, Maggie's long-time, bleached-blonde bombshell friend, while "Home School" is one of Hernandez's popular looks at his characters' lives from when they were little kids, drawn in an adorable simplified Dennis the Menace -style. These comics originally appeared from 1996 to 2002.

I could point to the frenetic pace of many of the stories; the cute, odd, and endearing sort of strangeness spawned in this lightly magical universe; or even the beautiful art, which is truly the mark of this master cartoonist. … Soup to nuts, this is a great book.
— Jeremy Nisen - Under the Radar