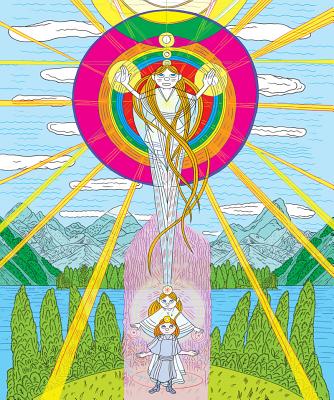 In this graphic novel, beings from the future attempt to raise the consciousness of those in the present.

Ron Regé, Jr. is a very unusual yet accomplished storyteller whose work has a passionate moral, idealistic core that sets him apart from his peers. The Cartoon Utopia is his Magnum Opus, a unique work of comic art that, in the words of its author, “focuses on ideas that I’ve become intrigued by that stem from magical, alchemical, ancient ideas & mystery schools.” It’s part sci-fi, part philosophy, part visual poetry, and part social manifesto. Regé’s work exudes psychedelia, outsider rawness, and pure cartoonish joy. In The Cartoon Utopia, “Utopians” of the future world are attempting to send messages through consciousness, outside of the constricts of time as we understand it. They live in a world of advanced collective consciousness and want to help us understand how to achieve what they have accomplished. They get together to perform this task in a way that evolved out of our current system of consuming information and entertainment. In other words, the opposite of television. Instead, these messages appear in the form of art, music and storytelling.

Ronald J. Regé, Junior (b. 1969) lives in Los Angeles, CA. A Plymouth, Massachusetts native, he is a musician as well as a cartoonist.

…[T]his is a work of supreme mystical genius. I put it on the level of Be Here Now. … I cannot emphasize enough just how incredible this text is. … It's articulated in a form that is graceful and psychedelic and fun to read.