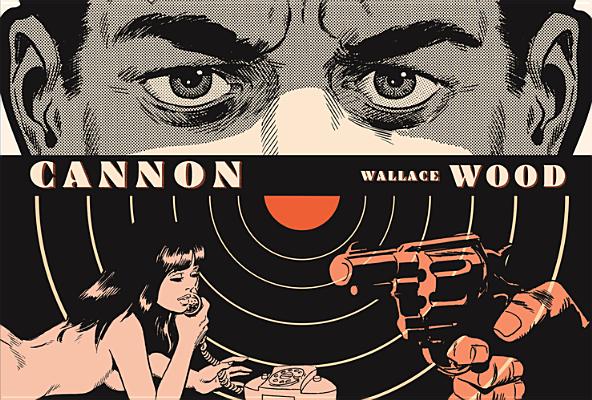 By Wallace Wood, Steve Ditko, Howard Chaykin (Introduction by)
$35.00
Possibly out of print. Email or call to check availability and price.

Cannon appeared in Overseas Weekly, a newspaper distributed exclusively to U.S. Military bases around the world. Uncensored by commercial editorial restrictions, Wood pulled out all the stops — producing a thrilling and salacious Cold War spy serial run amok with brutal violence and titillating sex, all in an effort to boost morale and support our troops! Initially brainwashed by the terrifying, voluptuous, and always half-naked Madame Toy to be “the perfect assassin” for the Red forces, Cannon was eventually rescued and brainwashed (again) by the CIA until he had no emotions whatsoever. Under the employ of our government’s Central Intelligence Agency, Cannon experiences action like no other agent!

Wallace Allan Wood (1927–1981) is widely considered to be America’s greatest science fiction cartoonist, but he was also one of the brightest lights of the early Mad comic and, later, a pioneering alternative/underground cartoonist/publisher with his magazine witzend.

Steve Ditko continues to create comics in his studio in New York City.

This is a visually stunning book… The real treat here is the ART! And I deliberately capitalise the word to emphasise just how beautiful Wood’s work is throughout the collection.
— Colm Creamer - Forbidden Planet International