Bezoar: And Other Unsettling Stories (Paperback) 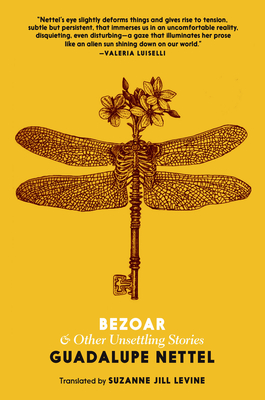 Shimmering strange stories that stick in your throat. Is there anything more surreal than living in a body?

One of the most important and watched writers of today.

Intricately woven masterpieces of craft, mournful for their human cries in defiance of our sometimes less than human surroundings, Nettel's stories and novels are dazzlingly enjoyable to read for their deep interest in human foibles. Following on the critical successes of her previous books, here are six stories that capture her unsettling, obsessive universe. "Ptosis" is told from the point of view of the son of a photographer whose work involves before and after pictures of patients undergoing cosmetic eye surgeries. In "Through Shades," a woman studies a man interacting with a woman through the windows of the apartment across the street. In one of the longer stories, "Bonsai," a man visits a garden, and comes to know a gardener, during the period of dissolution of his marriage. "The Other Side of the Dock" describes a young girl in search of what she terms "True Solitude," who finds a fellow soul mate only to see the thing they share lose its meaning. In "Petals," a woman's odor drives a man to search for her, and even to find her, without quenching the thirst that is his undoing. And the title story, "Bezoar," is an intimate journal of a patient writing to a doctor. Each narrative veers towards unknown and dark corridors, and the pleasures of these accounts lie partly in the great surprise of the familiarity together with the strangeness.

Since the early 1970s Suzanne Jill Levine has translated over forty volumes of Latin America's most innovative and distinguished fiction writers. The recipient of many honors, including several PEN awards, National Endowment for the Arts fellowships, and the Guggenheim Foundation Fellowship (for her literary biography of Manuel Puig), she edited for Penguin Classics in 2010 the five-volume series of Jorge Luis Borges's poetry and essays. Her translation of Luis Negron's Mundo Cruel: Stories (Seven Stories Press) received the Lambda Fiction prize in 2014, and most recently she co-translated Cristina Rivera Garza's The Taiga Syndrome (2018) for the Dorothy Project.

"Nettel's eye slightly deforms things and gives rise to tension, subtle but persistent, that immerses us in an uncomfortable reality, disquieting, even disturbing—a gaze that illuminates her prose like an alien sun shining down on our world." —Valeria Luiselli

"Bezoar is a delicate, magnetic carousel. Each story rises into view after the previous one, singular and unsettling, showing us that there is beauty to be found in every defect, and leaving us genuinely astonished at the mesmerising reflections it casts." —Samanta Schweblin

"The haunting stories in this collection feature characters that inhabit bodies which are strange places, so much so that they lose their human form, or are subjected to macabre investigations or perverse compulsions. Voyeurs, symbiosis, metamorphosis, fluids; the links here are hazy, the relationships with other beings, mutant. Guadalupe Nettel reminds us that there is nothing stranger than existence lived in these containers made of flesh, blood and madness." —Mariana Enríquez

"I love the work of Guadalupe Nettel, one of Mexico’s greatest living writers. Her fiction is brilliant and original, always suffused with sensuality and strange science—and these stories in Bezoar are among her best." —Paul Theroux

“[A] pocket bestiary of compulsives and fetishists, from an “olfactionist” who scours restaurant bathrooms for the scent of an elusive woman to a medical photographer aroused by images of patients’ irregular eyelids... Bezoar offers a disconcerting pleasure, akin to the uncanny intimacies of Edgar Allan Poe and Diane Arbus... Bezoar’s narrow, dreamlike attention invites unconscious complicity: caught up in dramas of curiosity and concealment, one forgets, momentarily, that the narrator is a man who interprets toilet-bowl skid marks or a woman who can’t stop eating her own hair. Nettel makes it impossible not to notice the latent voyeurism of short fiction, a genre that fixates, much like a fetish, on fragments of strangers’ inner lives.” —Julian Lucas, Harper’s

"Bezoar and Other Unsettling Stories, by Mexican writer Guadalupe Nettel, makes its debut in Suzanne Jill Levine’s English translation right on time. These six peculiar tales profile solitude and anti-solitude via disquieting scenarios and rich sensorial illustration, driven by the urge to describe that which misses a name. At a loss for words, we turn to stories... Levine’s [translation] triumphantly navigates the delicate dissonance between words, what they describe, and the character who wields them." —Lindsay Semel, Women’s Review of Books

"You may have read Guadalupe Nettel in translation before; her lyrical, measured novel After the Winter was a favorite around these parts. Feel like encountering a very different side of this talented writer? As this book’s title suggests, Bezoar takes her work into a more uncanny, disquieting vein." —Vol.1 Brooklyn