Shut Your Mouth and Save Your Life: The Dangers of Mouth Breathing and Why Nose or Nasal Breathing is Preferred, Based on the Native American Experien (Paperback) 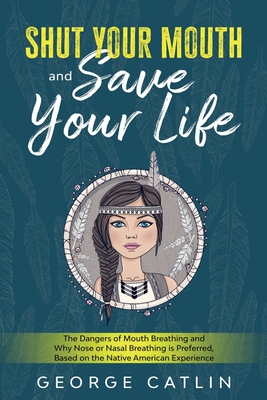 In his search for answers as to why Native Americans had such strong constitutions, longer and more trouble-free lifespans, and none of the normal handicaps of their more "civilized" counterparts, American painter and historian George Catlin drew a direct link between the "closed-mouth" sleeping practices of the "Indians," as he called them, and their superior constitutions and health.

Catlin was particularly impressed by the beauty, strength, demeanor, and superb health of the Native Americans. He described some of the tribes he met as picturesque and handsome, "almost beyond description." In visiting Native American graveyards, he couldn't help but notice the extremely low proportion of children buried compared to the more "civilized" races. Convinced that the diseases of civilized man weren't due to genetics or inherent flaws in physical makeup, Catlin began looking for the one great "lamentable fault" that might be behind the great disparity of health found between the civilized and less civilized peoples.

Today, sleep researchers have documented that breathing with the mouth open while sleeping can lead not only to snoring, but lower sleep quality and eventually, a decline in health. Thus, one more book written in the 1800's and considered by some to be a bit "over the top" has proven itself--and many of the concepts presented therein--to be not only scientifically sound, but deserving of consideration by virtually everyone interested in health.