James and the Giant Peach (CD-Audio) 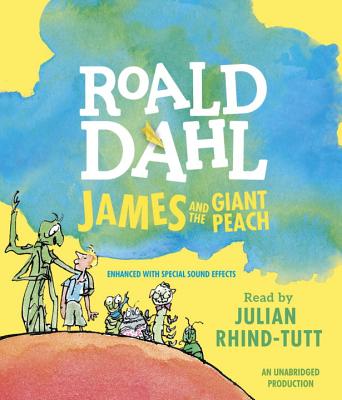 By Roald Dahl, Julian Rhind-Tutt (Read by)
$25.99
Possibly out of print. Email or call to check availability and price.

“Roald Dahl sometimes shared a tonal kinship with Ogden Nash, and he could demonstrate a verbal inventiveness nearly Seussian…[His] stories work better in audio than in print.” –The New York Times


A little magic can take you a long way.

After James Henry Trotter's parents are tragically eaten by a rhinoceros, he goes to live with his two horrible aunts, Spiker and Sponge. Life there is no fun, until James accidentally drops some magic crystals by the old peach tree and strange things start to happen. The peach at the top of the tree begins to grow, and before long it's as big as a house. Inside, James meets a bunch of oversized friends—Grasshopper, Centipede, Ladybug, and more. With a snip of the stem, the peach starts rolling away, and the great adventure begins!

"This newly-illustrated edition of an avowed children's favorite has all the makings of a classic match-up: Milne had Shepard, Carroll had Tenniel, and now Dahl has Smith...author and illustrator were made for each other, and it's of little consequence that it took almost 35 years for them to meet" --Kirkus.