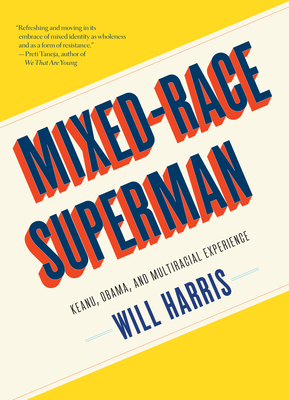 By Will Harris
$15.99
Possibly out of print. Email or call to check availability and price.

An edgy and insightful look at Barack Obama, Keanu Reeves, and the mixed-race experience in our divided world.

At once personally revealing and politically astute, author Will Harris reflects on the lives of two very different supermen: Barack Obama and Keanu Reeves. In an era where a man endorsed by the Ku Klux Klan can sit in the White House, Harris argues that the mixed-race of both Obama and Reeves gave them a cultural shapelessness that was a form of resistance. Reeves, as Neo in The Matrix, portrayed the chosen one on the silver screen, while Obama, for a brief moment, was a real-life superhero on the world stage.

Drawing on his own personal experience and examining the way that these two men have been embedded in our collective consciousness, Harris asks what they can teach us about race and heroism.

Will Harris is a London-based poet and critic. He is the author of the chapbook of poems, All This Is Implied, and was awarded a Poetry Fellowship from the Arts Foundation in 2019. His work has appeared in The Guardian, The London Review of Books, The Poetry Review, and elsewhere.

"A zany, exuberant and highly original meditation on what it means to come of age as a mixed-race person in a predominantly white world."—THE NEW YORK TIMES


"An observant writer, Harris shares illuminating intellectual analysis that incorporates philosophical introspection,... references to Greek mythology, and American politics in a stimulating narrative of civil rights activism, pop-culture heroism, and the multilayered, heroic struggle of people of color. A swift, inspired, and thought-provoking examination of the intersections of heroism, racial identity, and diversity."—KIRKUS


"[Harris] provides a roadmap through which readers might learn to think deeply about these topics."—SHELF AWARENESS

“Mixed-Race Superman does away with gods and heroes to write a new kind of masculinity into being. It is refreshing and moving in its embrace of mixed identity as wholeness and as a form of resistance.” —Preti Taneja, author of We That Are Young

“How do you understand your place in the world as a mixed-race person? Mixed-Race Superman swoops between the theoretical, the political, the historical, and the personal. And I, for one, am very grateful it exists.” —Rowan Hisayo Buchanan, author of Harmless Like You

“With an astonishing intellectual range and adaptability, his book is a must-read for anyone interested in racial identity in the modern world.” —Sandeep Parmar, author of Reading Mina Loy’s Autobiographies: Myth of the Modern Woman