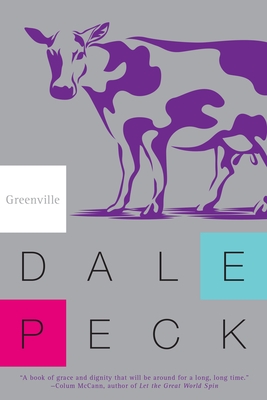 By Dale Peck
$16.00
Possibly out of print. Email or call to check availability and price.

In this novel based on real events, Dale Peck takes on the childhood of his father, Dale Peck Sr. Raised in poverty with seven brothers and sisters in suburban Long Island, terrorized by an abusive mother, Dale Sr.’s life changes when his alcoholic father dumps him at his uncle’s dairy farm in upstate New York. There he begins to thrive, finding real love and connection with his Uncle Wallace and Aunt Bess. But he is ultimately unable to outrun the chaos and violence of his old life.

A virtuoso work of great empathy and originality, Greenville is Peck’s most heartfelt and haunted novel to date.

Dale Peck is the author of twelve books in a variety of genres, including Martin and John, The Law of Enclosures, and Sprout. His fiction and criticism have appeared in dozens of publications, and have earned him two O. Henry Awards, a Pushcart Prize, a Lambda Literary Award, and John Simon Guggenheim Memorial Fellowship. He lives in New York City, where he has taught in The New School’s Graduate Writing Program since 1999.

Praise for Greenville (previously titled What We Lost)

“What We Lost left me wonderfully perplexed: how could so much emotion be crammed into so few pages? How could something so accessible seem so utterly personalized? How could such a traditional form of storytelling evoke such a new set of feelings? I could think of only one place to go for my answers: back to the first page. So that’s where I went. And I bet that’s where you’ll go after reading this terrific book.”
—Jonathan Safran Foer

“Dale Peck may have an ego the size of Montana. He may have annoyed half the known literary world with his screeds on other writers. But he may also be one our most adventurous and singularly talented writers working today.”
—San Francisco Chronicle

“The quality of his fiction is a pleasurable shock if all one’s read is his criticism . . . Peck’s fiction writing is visceral, risky yet controlled, lyrical and—especially in [Greenville]—enormously compassionate.”
—Salon

“What We Lost is as slender, fiercely focused and humane as Franzen’s epically bloated The Corrections was sloppy and self-involved . . . Eloquent and elegiac.”
—Philadelphia Gay News

“Every reader knows that time when you simply must close a book in gratitude and breathe in some of the silence it has created. What We Lost is that sort of book over and over again. This is a meditation on the permanence of glancing moments; an examination of how we tell our stories; a portrait of love and failure; and a hard, fascinating look at the consequences of the bits and pieces of our lives. With ease Peck stretches the boundaries of memoir into the realm of the imagination, and in the end contends that it doesn’t matter how we tell our stories—what matters is that we have them to tell. This is a book of grace and dignity that will be around for a long, long time.”
—Colum McCann

“Peck’s style has something of the grave concision of Raymond Carver and Richard Ford, a likeness rendered more emphatic by the atmosphere—masculine, hardscrabble, faintly ominous. It also puts one in mind of memoirs such as Mary Karr’s The Liars’ Club and Mikal Gilmore’s Shot in the Heart, tough but lyrical reports from the heart of American darkness and dysfunction . . . Much as I would like to give the slayer of literary reputations a taste of his own poisonous medicine, this finely wrought memoir makes it, in all conscience, impossible.”
—The Daily Telegraph

“This is the same stony, physical, unforgiving world that one meets in John Steinbeck, Cormac McCarthy or Annie Proulx, evoked in a similar sinewy, masculine prose. Peck is certainly one dickens of a writer—and maybe, annoyingly, he really is one of the best writers around. [Greenville] gives us an infinitely precious sense of a more austere, and much, much tougher America.”
—The Sunday Times

“It’s just as well that Dale Peck writes better than those he despises. The principal narrative is harrowingly heart-wrenching. I’ve read nothing better in long years.”
—The Times

“With great tenderness and courage, the son brings the father to life before our eyes. The older man’s boyhood, rich in possibility, is reconstructed in stunning detail. And it’s as if, by setting this down, Dale Peck Jr., in some way, saves Dale Peck Sr. It would be hard to find a more clear-eyed or generous writer.”
—Chloe Hooper, author of Tall Man

“Peck’s account of his father’s horrific upbringing stuns the readers with its juxtaposition of hope, sadness, and loss . . . The author, whose novels have been highly praised for their unforgettable prose, again enriches the reader with luminous language, shining like a pearl in the midst of his father’s wrenching tale.”
—Booklist

“Accomplished novelist Peck’s account of his father’s horrific 1950s Long Island childhood is reminiscent of Angela’s Ashes both in scope and tone. This stateside reincarnation of a world dominated by an abusive alcoholic father may not leave readers laughing, but it certainly provides a similar lens on a boy’s resilience and optimism . . . and Peck subtly demonstrates how this determined boy will not just endure life, but embrace it.”
—Publishers Weekly