Voices of Pineland: Eugenics, Social Reform, and the Legacy of Feeblemindedness in Maine (Paperback) 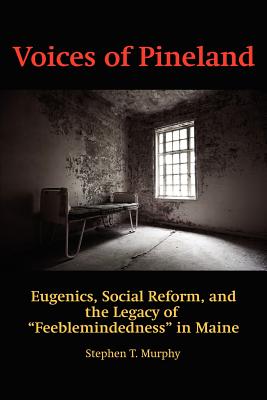 Voices of Pineland: Eugenics, Social Reform, and the Legacy of "Feeblemindedness" in Maine by Stephen Murphy tells the story of the Maine School for the Feebleminded, later known as Pineland Hospital and Training Center. Based on an in depth analysis of annual institutional reports, newspaper clippings, legal documents, and other archival sources as well as interviews with former residents, their family members, and staff, Murphy traces the history of the Maine institution from its founding in 1908 to its eventual closure in 1996. Prior to 1908, Maine sent many of its citizens with intellectual and developmental disabilities to Massachusetts. When the state established the Maine School for the Feebleminded, it modeled it after an institution in Massachusetts that had been the first asylum for socalled "idiots" in the United States. Murphy shows the influences of both social forces and the personalities of superintendents, elected officials, and eventually lawyers, advocates, and court officials on Pineland's history Voices of Pineland is more than the story of Maine's institution for the feebleminded, though. It provides a lens through which to view the history of people with intellectual disabilities in twentieth century America. The founding of the Maine School for the Feebleminded was a product of the eugenics fervor that swept the country around the turn of the century and continued for several decades. The feebleminded were seen as a cause of a broad range of social problems and a threat to the social order. Like other states, Maine turned to the institution and later involuntary sterilization to prevent the feebleminded from spreading their alleged defective genes. The population of the Maine school steadily grew, and the institution soon became overcrowded and understaffed. As early as 1938, charges of abuse and neglect at the institution were reported in the press. This predated the flurry of exposes on state schools and mental hospitals in the national media, including Life magazine and Reader's Digest, in the post-World War II era.