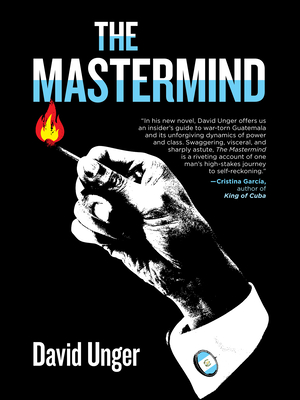 Based on a true story, The Mastermind is a tense political thriller about a successful Guatemalan lawyer whose life takes a strange turn when a failed affair leads to his faking his own death and implicating the government. Unger's searing political criticism blends with gripping real-life details to sketch an unforgettable picture of modern Guatemalan society.
--World Literature Today

The Mastermind teems with the pulse of daily life in the tropics: the sights and sounds, the smells and tastes. He takes millionaires, whores, provocateurs, hit men, bankers with deep pockets, and political agendas, and weaves them into a dazzling tapestry. What befalls those driven by hubris--the writing on the wall, a fall from the heights to the depths--are part of the pattern, the biblical tales of warning, the consequences that cannot be avoided...Unger is the poet of his complicated homeland...How fortunate we are that when Unger speaks for them, his words soar.
--American Book Review

Unger has given us not just a riveting portrait of a bizarre series of events, but a window onto the ethical challenges we all face.
--Review: Literature and Arts of the Americas

The corruption and hopelessness of modern Guatemalan politics interfere in the life of a womanizing lawyer in this engaging novel...Through the lens of Guillermo's doomed relationship, Unger successfully evokes the tragedy and futility of life in Guatemala in a raw and unforgettable novel.
--Publishers Weekly

This novel by Guatemalan-born Unger (The Price of Escape, 2011) offers a compelling portrait of a country shattered by government corruption, civil war, mass murder, drug cartels, ordinary street crime, inequality, desperate poverty, and even the effects of globalization....The rich but tragic sense of place Unger develops in this intriguing literary thriller will appeal to lovers of international crime fiction.
--Booklist

Unger bases his latest novel on the true story of a Guatemalan lawyer who planned his own murder in 2009, fleshing out the story with healthy shots of sex and corruption....The political elements in Unger's story become more gripping through the eyes of his flawed protagonist. He's especially good at subtly shifting the tone of the narrative so that danger signs build up around Guillermo before either he or the reader realizes.
--Kirkus Reviews

This novel contains so much background and capable storytelling that readers are likely to be blown away by the rich depths of David Unger's writing. This is a book that pulls no punches...This is a compelling story that can easily be read in a single sitting. And, as in any good mystery, when things go wrong, the novel becomes that much more interesting. Even for readers with no interest in Guatemala per se, this is one worth reading for the sheer joy of the writing itself.
--Reviewing the Evidence

By all appearances, Guillermo Rosensweig is the epitome of success. He is a member of the Guatemalan elite, runs a successful law practice, has a wife and kids and a string of gorgeous lovers. Then one day he crosses paths with Maryam, a Lebanese beauty with whom he falls desperately in love...to the point that when he loses her, he sees no other option than to orchestrate his own death.

The Mastermind is based on the bizarre real-life story of Rodrigo Rosenberg, a Guatemalan attorney who, in 2009, planned his own assassination after leaving behind a video accusing Guatemalan president lvaro Colom of his murder. (In April 2011, the New Yorker published an article by David Grann about Rosenberg which has been optioned by Matt Damon for his directorial debut.) This is a fascinating depiction of modern-day Guatemala and the corrupt, criminal, and threatening reality that permeates its society.