The Can Man (Paperback) 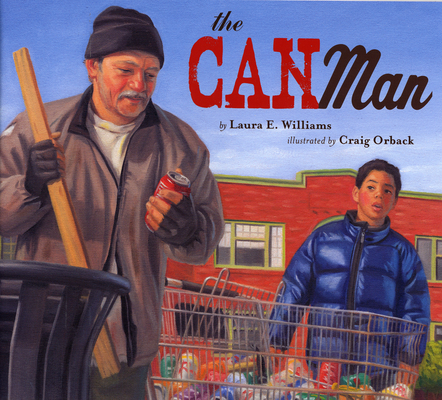 To earn money, a young boy decides to collect and redeem empty soft drink cans, but ends up giving away his money to help a local homeless man.

Tim's birthday is just a week away, and more than anything he wants a skateboard. But money is tight, and Tim knows his family cannot afford to buy him a board.

As Tim ponders how he might earn money for a skateboard, he hears The Can Man down the street collecting empty soft drink cans. The clang of the cans in the homeless man's cart gives Tim an idea. He will collect cans too, and cash them in for the redemption money. By the end of the week, Tim has almost reached his goal-until a couple of chance encounters with The Can Man change everything.

Told with honesty and respect, this timely story shines a perceptive light on current social concerns. Readers will be encouraged to think beyond themselves and celebrate the simple acts of kindness and sharing that make a difference in people's lives.

Laura E. Williams is the author of numerous award-winning picture books and middle grade novels. Born in South Korea and adopted by an American family, Williams has since lived and traveled all over the world. She and her husband live in Farmington, Connecticut. Visit her on the Web at lauraewilliams.com. Craig Orback is a fine artist who has illustrated many highly praised books for children, several of which focus on historical subjects. The Can Man especially appealed to Orback because of its contemporary topic and setting. In addition to creating fine art and illustrations, Orback teaches children's book illustration and oil painting at local community colleges. He lives near Seattle, Washington. You can find him online at craigorback.com.