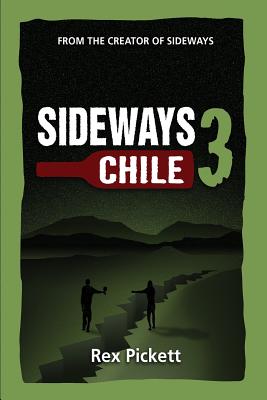 "Sideways 3 Chile" is the third, and final, novel in the trilogy that began with "Sideways" -- which became the award-winning movie of the same title by Oscar-winning director Alexander Payne -- and "Vertical," which won the 2011 Gold Medal for Fiction from the Independent Publisher Book Awards. "Sideways 3 Chile" finds our main protagonist Miles Raymond (Paul Giamatti in the original film) running out of money, but still surviving on the fumes of a past, but fleeting, fame. When he is offered an opportunity by a reputable magazine to write an article about the diverse wine regions of the country of Chile he jumps at the chance. At the end of "Vertical," Miles had fallen in love with a Spanish girl, Laura, and he asks her to fly from Spain to accompany him. Miles, in full panic anxiety mode, which is endemic to his character, flies to Chile to meet Laura and discover this beautiful and vast country. Complications, heartbreak, and romance ensue. In the great and desolate Atacama Desert in the north of Chile Miles comes face to face with himself. About the Author: Rex Pickett is the critically-acclaimed author of the novel "Sideways," upon which the multiply award-winning Alexander Payne movie of the same title was adapted. The film, now an unqualified cult classic, won over 350 awards after its release in 2004, including the Oscar for Best Adapted Screenplay. A sequel to "Sideways" tilted "Vertical" (2011) won the Gold Medal for Fiction from the Independent Publisher Book Awards. In 2012 Rex successfully adapted his novel "Sideways" into a hit play that ran for 6 months at the Equity-waiver Ruskin Group Theater. In the summer of 2013 it opened at La Jolla Playhouse's 400-seat Potiker Theater under the direction of Des McAnuff ("Jersey Boys") and shattered all attendance records for a non-musical in La Jolla Playhouse's august 30-year history. "Sideways" the play now heads to London and beyond. In 2000, Rex's ex-wife Barbara Schock won the Academy Award for Best Live Action Short. The 33-min. film, titled "My Mother Dreams the Satan's Disciples in New York," is an original screenplay by Rex. Rex has written and directed two feature films, written many screenplays and TV pilots, written two novels, and now a hit play. He is currently in Italy writing a major motion picture for the De Angelis Group. He resides in La Jolla, CA. His archive now resides at the Geisel Library's Special Collections on the campus of UCSD, Rex's alma mater. Keywords: Sideways, Rex Pickett, Pinot Noir, Merlot, Wine, Chile, Miles, Jack, Sideways movie