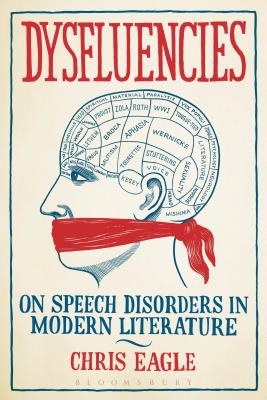 By Chris Eagle
Email or call for price

Dysfluencies is the first comprehensive study of how speech disorders are portrayed in modern literature. Tracing the roots of this interaction between literary practice and speech pathology back to the rise of aphasiology in the 1860s, Dysfluencies examines portrayals of disordered speech by writers like Zola, Proust, Joyce, Melville, and Mishima, as well as contemporary writers like Philip Roth, Gail Jones, and Jonathan Lethem. Dysfluencies thus speaks directly to the growing interest at present, both in popular culture and the Humanities, regarding the status of the Self in relation to speech pathology. The need for this type of study is clear considering the number of prominent writers whose works foreground disorders of speech: Melville, Zola, Kesey, Mishima, Roth, et al. Moreover, thinkers like Freud, Bergson, and Jakobson were similarly concerned with the implications of language breakdown. This volume shows this concern began with the rise of neurology and aphasiology, which challenged spiritual conceptions of language and replaced them with a view of language as a material process rooted in the brain. Dysfluencies traces the history of this interaction between literary practice and speech pathology, arguing that works of literature have responded differently to the issue of language breakdown as the dominant views on the issue have shifted from neurological (circa 1860s to 1920s) to psychological (circa 1920s to 1980s), and back to neurological during the so-called "decade of the Brain" (the 1990s).

Chris Eagle (PhD, University of California, Berkeley) is Research Lecturer in the Writing and Society Research Centre at the University of Western Sydney, Australia.