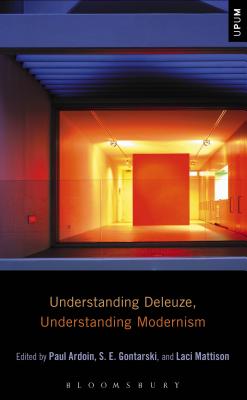 Understanding Deleuze, Understanding Modernism explores the multi-faceted and formative impact of Gilles Deleuze on the development and our understanding of modernist thought in its philosophical, literary, and more broadly cultural manifestations.

Gilles Deleuze himself rethought philosophical history with a series of books and essays on individual philosophers such as Kant, Spinoza, Leibniz, Nietzsche, and Bergson and authors such as Proust, Kafka, Beckett and Woolf, on the one hand, and Bacon, Messiaen, and Pollock, among others, in other arts. This volume acknowledges Deleuze's profound impact on a century of art and thought and the origin of that impact in his own understanding of modernism.

Understanding Deleuze, Understanding Modernism begins by "conceptualizing" Deleuze by offering close readings of some of his most important works. The contributors offer new readings that illuminate the context of Deleuze's work, either by reading one of Deleuze's texts against or in the context of his entire body of work or by challenging Deleuze's readings of other philosophers. A central section on Deleuze and his aesthetics maps the relationships between Deleuze's thought and modernist literature. The volume's final section features an extended glossary of Deleuze's key terms, with each definition having its own expert contributor.

Paul Ardoin is Assistant Professor of English at the University of Texas at San Antonio, USA.S. E. Gontarski is the Robert O. Lawton Distinguished Professor of English at Florida State University, USA. He is the author or editor of 15 books, including Samuel Beckett: The Complete Short Prose, 1928-1989 (1996), The Theatrical Notebooks of Samuel Beckett, Volume IV: The Shorter Plays (1999), A Companion To Samuel Beckett (2010), Beckett after Beckett (ed. with Anthony Uhlmann, 2006), The Faber Companion to Samuel Beckett: A Reader's Guide to His Life, Works, and Thought (with C. J. Ackerly, 2006), The Grove Press Reader, 1951-2001 (2001), Modernism, Censorship and the Politics of Publishing (2000). Laci Mattison is Visiting Lecturer of English Literature at Florida State University, USA.