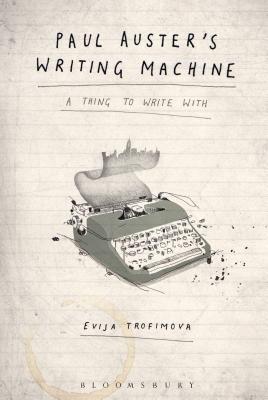 By Evija Trofimova
Email or call for price

Paul Auster is one of the most acclaimed figures in American literature. Known primarily as a novelist, Auster's films and various collaborations are now gaining more recognition. Evija Trofimova offers a radically different approach to the author's wider body of work, unpacking the fascinating web of relationships between his texts and presenting Auster's canon as a rhizomatic facto-fictional network produced by a set of writing tools.

Exploring Auster's literal and figurative use of these tools - the typewriter, the cigarette, the doppelg nger figure, the city - Evija Trofimova discovers Auster's "writing machine+?, a device that works both as a means to write and as a construct that manifests the emblematic writer-figure. This is a book about assembling texts and textual networks, the writing machines that produce them, and the ways such machines invest them with meaning.

Embarking on a scholarly quest that takes her from between the lines of Auster's work to between the streets of his beloved New York and finally to the man himself, Paul Auster's Writing Machine becomes not just a critical investigation but a critical collaboration, raising important questions about the ultimate meaning of Auster's work, and about the relationship between texts, their authors, their readers and their critics.

Evija Trofimova (PhD, University of Auckland) is a writer, translator and critic who divides her time between Latvia and New Zealand.