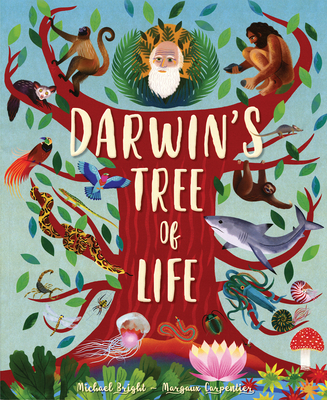 From the first living things six billion years ago to the animals living around the world today, explore how the huge diversity of the life on Earth came to be. Follow the branches of Charles Darwin’s “Tree of Life” and discover how plants and animals have evolved in many amazing ways. Find out why crabs run sideways, which fish was the first to walk on land, why birds are similar to dinosaurs, and why brains are located in our heads and not in our feet. The book is stunningly illustrated by Margaux Carpentier in a bright and bold distinctive style.

Michael Bright worked as a producer with the BBC’s Natural History Unit, winning many international radio and television awards. He is a member of the Royal Society of Biology and has written many books on wildlife, science, and conservation.

MARGAUX CARPENTIER is a painter and illustrator based in London. She works on all kind of projects, ranging from illustrated books to large scale painting and murals, and sometimes even sculptures.

“Both an introduction to Darwinian concepts and an exploration of the Earth’s life. Even before explanations of natural selection and species origin, there is a helpful ‘Geological Time Chart’ that explains eon, era, period, and epoch. Following these, double-page spreads show examples of animals, plants, and protists (which are neither) both extant and extinct on the branches of a tree that begins with one-celled organisms and moves into and beyond the category called ‘Skillful Mammals.’ The illustrations and layout are spectacular. Stylized animals and plants are solid blocks of color against gradated blue backgrounds. Each spread is headed in sinuous display type; a vibrantly hued tree branch snakes across the page, creating spaces for flora and fauna and fascinating facts about them. Who knew that tardigrades can live for 30 years without eating? And how sly to note that both rats and humans have conquered the world with their generalized diets. The graceful, accessible text respects its readers. Early on, it asserts that ‘the first living things were simple cells, which were different from non-living things because they could make copies of themselves.’ Words not defined within the text are captured in an appropriate glossary. There are several references to climate change, the first noting how green plants cooled the planet about 450 million years ago. The text strikes an excellent balance between upholding scientific research and noting its limits as well as its ongoing, self-correcting, nature. Darwin would approve. (index) (Informational picture book. 8-12)”

“Both an introduction to Darwinian concepts and an exploration of the Earth’s life… The illustrations and layout are spectacular… The graceful, accessible text respects its readers… [It] strikes an excellent balance between upholding scientific research and noting its limits as well as its ongoing, self-correcting, nature. Darwin would approve.”
— —Kirkus Reviews (starred review)

"Entwined in Charles Darwin's theories and the tree of life, evolution is clearly explained. Well organized and beginning with a geology time chart, the book breaks out into ever-increasing complexity. Bright covers ancient times and how chemicals and heat acted as an evolutionary catalyst. There is quite a bit in between that is addressed in small bites. Author and illustrator have created a congenial mix, using tree limbs to symbolize the tree of life growing around each distinct blurb and then meandering across the double-page spread. Carpentier has created a bright, cheerful platform for the text. Her depiction of the life form and the tree of life enhances the text's organization, making the huge time spans manageable in this successful overview ' Back matter consists of a glossary and an index. VERDICT A pleasing visual representation '

This fresh approach to evolution provides young readers with an innovative introduction to natural selection and adaptation. After brief bits about Charles Darwin and his theory of survival of the fittest, two-page spreads introduce flora and fauna from various branches of his classification system, highlighting how certain characteristics supported various life forms' continued existence. For example, the section on €˜Flats, Tubes, and the Indestructibles' features brief commentary and colorful illustrations of worms (flatworms, Christmas Tree worms), thread-like animals (nematodes and roundworms), worms with legs (or velvet worms), and water bearstiny critters that can survive for 30 years without eatingand identifies what properties made a difference (developing front and rear ends was a major breakthrough). Subsequent topics include €˜Armored Animals,' €˜Lots of Legs,' €˜Big Babies,' €˜Running on Tiptoes,' and €˜Mammals that Gnaw'in short, selected physical aspects that allowed species to thrive, even if just for a while (sorry, dinosaurs). Satisfying picture captions emphasize how these evolving traits led to the ascendancy of certain species, and also offer well-chosen factoids to further pique readers' curiosity. A boon for STEM collections, this is also a natural for those kids who have already memorized lists of prehistoric raptors and worked their way through the entire animal book canon.