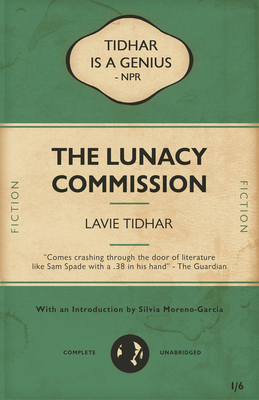 “Tidhar is a genius at conjuring realities that are just two steps to the left of our own.” –NPR

“A warped genius... There is no one like him.” – Ian McDonald

Lavie Tidhar’s ground-breaking, award winning novel A Man Lies Dreaming introduced Adolf Hitler as a down-at-heels private detective, forced to eke out a miserable living in 1930s London. Forgotten by history, the man now calling himself Wolf is the lowest of the low, suffering fresh humiliations at every turn.

Now Wolf is back, in five darkly comic new stories that see him take on blackmail, murder, and theft – not to mention his old comrades.

A brilliant alternate history noir with a heart, these stories are in turn shocking, horrifying and comic, as could only come from the mind of World Fantasy Award winner Lavie Tidhar.

Lavie Tidhar is author of Osama, The Violent Century, A Man Lies Dreaming, Central Station, and Unholy Land, as well as the Bookman Histories trilogy. His latest novels are By Force Alone, children’s book The Candy Mafia and comics mini-series Adler. His awards include the World Fantasy Award, the British Fantasy Award, the John W. Campbell Award, the Neukom Prize and the Jerwood Fiction Uncovered Prize.