To Live and Dine in L.A.: Menus and the Making of the Modern City / From the Collection of the Los Angeles Public Library (Hardcover) 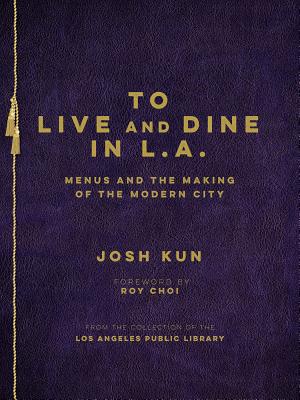 How did Los Angeles become the modern city the world watches? We know some of the answers all too well. Sunshine. Railroads. Hollywood. Freeways. But there's another often overlooked but especially delicious and revealing factor: food. In its fourth book collaboration with the Los Angeles Public Library and the Library Foundation of Los Angeles, Angel City Press releases To Live and Dine in L.A.: Menus and the Making of the Modern City by Josh Kun. With more than 200 menus--some dating back to the nineteenth century-- To Live and Dine in L.A. is a visual feast of a book.

In his detailed history, author Josh Kun riffs on what the food of a foodie city says about place and time. Kun shows how vintage menus teach us about more than just what's tasty, and serve as guides to the politics, economics, and sociology of eating. For a broader take on the city's food culture, Kun turns to L.A.'s most-beloved chefs and cultural observers: essays from Chef Roy Choi, Pulitzer Prize-winning critic Jonathan Gold, museum curator Staci Steinberger and more shed light on a unique and vibrant culinary history.

Josh Kun is an Associate Professor in the Annenberg School for Communication and Journalism at the University of Southern California. His previous collaboration with L.A. Public Library was the award-winning book and exhibition Songs in the Key of Los Angeles. He has written for the New York Times, Los Angeles Times, and many other publications. He is author and an editor of several books, including Audiotopia: Music, Race, and America, Tijuana Dreaming: Life and Art at the Global Border, and Black and Brown Los Angeles: Beyond Conflict and Coalition. Kun curated Songs in the Key of L.A. in 2013 and To Live and Dine in L.A. in 2015, both exhibitions that originated at Los Angeles Central Library galleries.