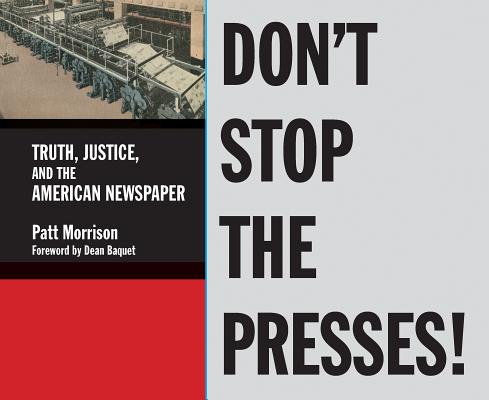 Real News on real paper. Newspapers--a free press--were the cornerstone of the Founding Fathers' working model of democracy. And they remain so. Whether read at the kitchen table, in the boardroom, or on a laptop on the subway, newspapers--as has been said of them for more than a half-century--are "the first draft of history." Veteran journalist Patt Morrison proves it, and then some, in the pages of Don't Stop the Presses Truth, Justice, and the American Newspaper.

Morrison showcases the importance of newspapers--in both words and startling imagery--and documents the impact of the medium. The press's mission--as Morrison emphasizes--is uniquely set out in the First Amendment of the Bill of Rights: "Congress shall make no law . . . abridging the freedom of speech, or of the press." From the broadsheets of the American Revolution to the computer displays of the electronic revolution, from the age of street-corner newsboys in the days of the Hearsts and Pulitzers to the advent of legitimate online news sites, newspapers are the voices of a nation.

Morrison's wit and remarkable journalistic wisdom are amplified by the histories of the papers, people, places, and events that captivated America and its front pages. Images and vivid anecdotes from the nation's two-plus centuries of newspapering enhance the story in words. More than 200 images present the visual side of Morrison's remarkable story.

In his eloquent foreword, Dean Baquet, executive editor of The New York Times, sees the role of newspapers as nothing short of a moral and democratic imperative: "It has never been more evident than in this year, when the glories of journalism have been on display, when the newsrooms Patt Morrison's timely book summons to mind woke up to find themselves once again vital to Democracy."

There is one overwhelming message in Morrison's book: Don't Stop the Presses

Patt Morrison has a share of two Pulitzer Prizes as a longtime Los Angeles Times writer and columnist. As a public television and radio broadcaster, she has won six Emmys and a dozen Golden Mike awards. Her first book, Rio LA, about the Los Angeles River, was a best-seller. The renowned Hollywood hot dog stand, Pink's, named its vegetarian dog in her honor.

Newspapers are the lifeblood of democracy, whether printed on paper or in cyberspace. They are crafted through reporting, fact-checking, and skillful prose, and they inform, educate, and entertain, as they've done since the founding of our republic and will continue to do for centuries to come. Patt Morrison takes us on a journey that will surprise readers, engage and thrill them, and encourage all of us to shout out in praise of the women and men who keep the presses going. --Ken Burns, renowned documentarian