The Autograph Book of L.A. (Hardcover) 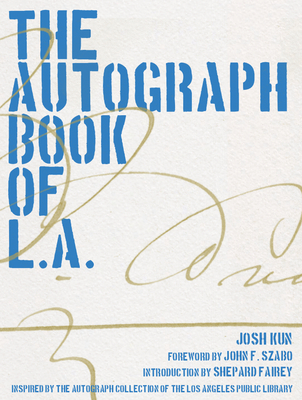 By Josh Kun
$45.00
Possibly out of print. Email or call to check availability and price.

But leave it to MacArthur Fellow, USC professor, and culture communicator par excellence Josh Kun to take the concept beyond mere names in little forget-me-not books. He looks at his hometown and sees the "signatures" of others who call it home. Suddenly graffiti and imagery become autographs of a new L.A., far beyond those explored in 1906 by Charles Lummis, the city librarian who conceived the autograph collection as a way to document the century.

The Autograph Book of L.A. was born from an early 20th century archival collection, but its goals are very 21st century," says Kun. "I was inspired by the early collection to ask key questions of the L.A. of right now. Whose voices matter? Whose names are remembered?"

In 2018, Kun and librarians from LAPL followed Lummis's lead and relaunched the autograph collection, sending blank stationery to contemporary Angelenos--artists, writers, scientists, activists, entertainers, and thought leaders. The autographs of contemporaries came flooding in. Television legend Norman Lear left a maxim and famed billboard persona Angelyne left her signature "kiss." Next, taking a new look at the meaning of fame, Kun and LAPL provided stationery at branch libraries urging Angelenos at large to leave their mark: their signatures, their stories, their art. The Stitchin' Sistahz Quilt Circle listed its members, Skid Row artist Shugga left a signature, and the family behind Yuca's taco hut left a page full of memories and a photograph of Mama Socorro Herrera who founded it. Suddenly the LAPL that gained renown in Susan Orlean's The Library Book is at it again.

The Autograph Book of L.A. is full of color, full of life, and full of stuff to ponder. Its message applies to any city, any library that asks "What's in a name?" Kun and his team show how a collection of names has become one of a library's most important documents of time and place. (AND, did we mention this book is gorgeous?) Check it out

Josh Kun is professor of Communication and Journalism at USC's Annenberg School. He is author of several books, including two others based on LAPL special collections: Songs in the Key of Los Angeles and To Live and Dine in L.A.