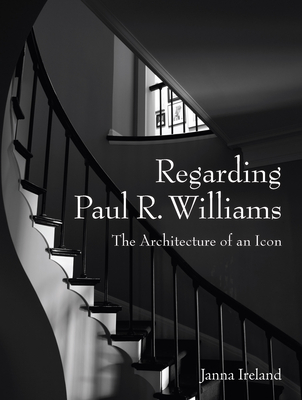 Hollywood homes the way you imagined them to be when you were a child--all Mediterranean curves and elegant grayscale--designed by visionary Black architect Paul R. Williams.

Janna Ireland, an award-winning photographer, presents a collection of stunning, intimate black-and-white photographs of the work of Paul Revere Williams, who was known as "Hollywood's Architect" and was the first black architect admitted to the American Institute of Architecture.

Regarding Paul R. Williams: A Photographer's View is a photographic exploration of the work of the first AIA-certified African American architect west of the Mississippi River. Known as "Hollywood's Architect", Paul Revere Williams was a Los Angeles native who built a wildly successful and as an architect decades before the Civil Rights Movement. He designed municipal buildings and private homes as well as banks, churches, hospitals, and university halls. He designed public housing projects and mansions for celebrities like Frank Sinatra and Lucille Ball. In 1923, Williams became the first black member of the American Institute of Architects. In 2017, nearly forty years after his death, he became the first black recipient of the AIA Gold Medal.

In her book Regarding Paul R. Williams: A Photographer's View, artist Janna Ireland explores the work and legacy of Williams through a series of intimate black-and-white photographs. Ireland gives the reader a vision of Williams that is both universal and highly personal. More than a book of architectural photographs, Regarding Paul R. Williams is the result of one artist's encounter with another, connecting across different generations within the same city.

Janna Ireland was born in Philadelphia, but has chosen Los Angeles as her home. She holds an MFA the from UCLA Department of Art and a BFA from the Department of Photography and Imaging at NYU. Ireland is the 2013 recipient of the Snider Prize, presented by the Museum of Contemporary Photography, Columbia College Chicago. Her work has been shown in solo exhibitions in Los Angeles, San Francisco, New Orleans, and Chicago, and in group exhibitions across the United States and internationally. She has been published in Aperture, Harper's, Art Papers, Vice, and The Los Angeles Times.