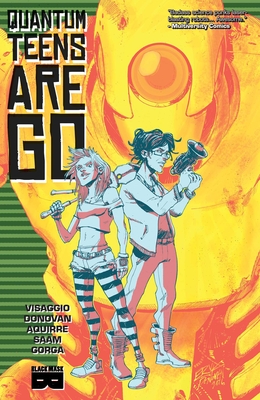 By Magdalene Visaggio, Eryk Donovan (Illustrator)
$12.99
Possibly out of print. Email or call to check availability and price.

Mad science is the punkest s*** there is. Teenage sweethearts Nat & Sumesh spend their nights breaking into abandoned superlabs to steal the parts they need to build a time machine - and they've just found the most important piece. But mysterious entities keep trying to stop them from turning it on. Now all they've gotta do is hang on long enough to figure out why. Magdalene Visaggio (Eisner-nominated Kim & Kim) and Eryk Donovan (Memetic) bring you a high-octane adventure full of robots, muscle cars, and queer-a** skater punks. Collects issues 1-4.

"It's everything you want out of comics, a smart, new angle on tried and true sci-fi." -James Tynion (Batman, Something Is Killing The Children)

Magdalene Visaggio is the Eisner and GLAAD Media Award-nominated writer of Eternity Girl, Morning in America, and Kim & Kim. Growing up in Richmond, Virginia, she moved to NYC after college and abandoned plans to join the clergy to write comic books where people hit each other with guitars. Visaggio came to wider prominence in the comic book industry with the limited series Kim & Kim from Black Mask Studios. The series was nominated for the 2017 Eisner Award for Best Limited Series and GLAAD Media Award for Outstanding Comic Book. The success led to Visaggio signing a three-book deal with Black Mask Studios for her next three projects: Quantum Teens Are Go, Kim & Kim: Love is a Battlefield and Sex Death Revolution. In 2017, she was chosen to take part in DC Comics’ Writer Workshop program following her Eisner nomination for Kim & Kim. Her first book with DC, Eternity Girl, was released in 2018 to critical acclaim/confusion. It’s a weird book. In 2018 her graphic novel The Ojja-Wojja: A Teenage Nightmare was bought by HarperCollins imprint Balzer + Bray. Her first graphic novel with HarperCollins is expected in Fall 2022. A transgender woman, Visaggio transitioned in 2016.

"A tale about family loss and transition as much as it is about punk rock teens who mess around with theoretical physics in their spare time."
— Newsarama