Shawn Thornton: Fighting My Way to the Top (Hardcover) 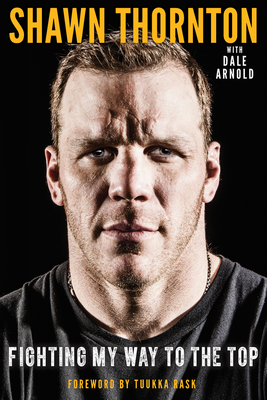 Shawn Thornton was an unlikely NHL success, to say the least. The Oshawa, Ontario native was picked late in the OHL and later thought he was being pranked when the Toronto Maple Leafs called him to say he'd been selected in the seventh round of the 1997 NHL draft.

After years spent working and maturing in the AHL, Thornton would go on to play 14 seasons with the Chicago Blackhawks, Anaheim Ducks, Boston Bruins, and Florida Panthers, winning two Stanley Cups along the way.

For the first time, in this candid memoir, Thornton opens up about his life in hockey and beyond, from his early days as an unrated prospect to the leadership lessons he learned in the minors, from the most difficult on-ice brawls to the ecstasy of reaching the sport's most celestial heights.

Fans will not want to miss this story of perseverance and finding one's own path.

Shawn Thornton played for the Chicago Blackhawks, Anaheim Ducks, Boston Bruins, and Florida Panthers during his 14 seasons in the NHL. He joined the Panthers executive staff following retirement and currently serves as the team's Chief Commercial Officer.

Dale Arnold hosts Boston Bruins television broadcasts on NESN as well as the daily Dale, Holley & Keefe show on WEEI radio. He is the only person who has done play-by-play broadcasts for all five of the Boston area's major professional sports franchises. Arnold is the author of If These Walls Could Talk: Boston Bruins.

"Shawn epitomized everything there was about being a Bruin: tough, down to earth, and always giving back to the community. It's a pleasure to call him a friend." —Ken Casey, Dropkick Murphys