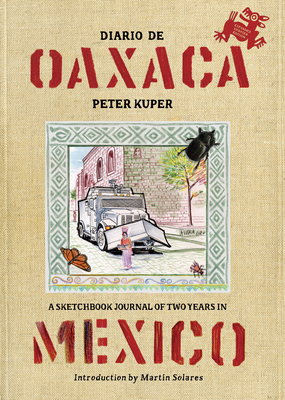 Painting a vivid, personal portrait of social and political upheaval in Oaxaca, Mexico, this unique memoir employs comics, bilingual essays, photos, and sketches to chronicle the events that unfolded around a teachers' strike and led to a seven-month siege. When award-winning cartoonist Peter Kuper and his family moved to the 16th-century colonial town of Oaxaca in 2006, they planned to spend a quiet year or two enjoying a different culture and taking a break from the U.S. political climate under the Bush administration. What they hadn't counted on was landing in the epicenter of Mexico's biggest political struggle in recent years. Timely and compelling, this extraordinary firsthand account presents a distinct artistic vision of Oaxacan life, from explorations of the beauty of the environment to graphic portrayals of the fight between strikers and government troops that left more than 20 people dead, including American journalist Brad Will. This expanded paperback edition includes 32 pages of new material.

Peter Kuper is a cofounder and editorial board member of World War 3 Illustrated. He is best known for drawing Mad magazine's Spy vs. Spy comic and has also illustrated for Newsweek and Time magazine. He is the author of the Eisner Award-winning graphic novel Ruins as well as Drawn to New York and The System. Martín Solares is the author of the novel The Black Minutes, which was a finalist for the Rómulo Gallegos, the Antonin Artaud, and the Bibliothèque des Littératures Policières Prizes.

"Kuper is a colossus; I have been in awe of him for over twenty years. Teachers and students everywhere, take heart: Kuper has in these pages borne witness to our seemingly endless struggle to educate and to be educated in the face of institutions that really don't give a damn. In this ruined age we need Kuper's unsparing compassionate visionary artistry like we need hope." —Junot Díaz, Pulitzer Prize–winning author of The Brief Wondrous Life of Oscar Wao

"Peter Kuper is undoubtedly the modern master whose work has refined the socially relevant comic to the highest point yet achieved." —Newsarama.com

"Kuper has long been among the most politically engaged and stylistically distinctive artists working in comics, and both qualities take center stage here." —Publishers Weekly

"[Kuper's] attempt to escape the last years of the Bush Administration led him to relocate to a town that turned out to be under martial law, in an area plagued by riptides, ecotourists, and stray dogs, all faithfully—and hilariously—documented here." —New Yorker

"In the hands of an illustrator with such creative gifts, Oaxaca is a brilliant dreamscape whose bugs and vegetation are as visually appealing as its protest graffiti and wild dogs." —World Literature in Review

"Peter Kuper’s work reminds us of the vibrant and inspired everyday people who live under the tyranny of petty and corrupt officials in both Mexico and the United States." —Hans Rollman, popmatters.com