Bullet Points and Punch Lines: The Most Important Commentary Ever Written on the Epic American Tragicomedy (Paperback) 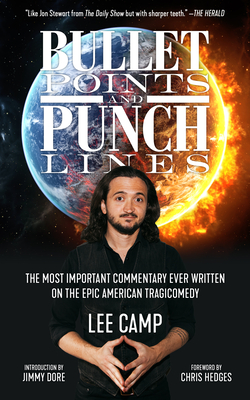 By Lee Camp, Jimmy Dore (Introduction by), Chris Hedges (Foreword by)
$17.00
On Our Shelves Now

Lee Camp is an accomplished comedian in the vein of George Carlin, Richard Pryor, Bill Hicks, but who has been ghettoized into some more obscure corners of the politically factionalized internet due to his uncompromising Left radicalism. His internet show, Redacted Tonight, functions as a palette cleansing answer to and parody of the de-clawed liberalism of the Daily Show or Full Frontal (but with a much smaller budget). Camp’s newsworthy comedy is always based on the excellent, but almost completely ignored investigative journalism of sites like the Intercept, the Grayzone, and Empire Files which helps his comedic ‘news coverage’ to be way ahead of the pack; sometimes exposing and highlighting stories that the mainstream press won’t touch for months until they reach critical mass and can no longer be ignored. The fact that PMPress published this collection of essays should be recommendation enough since they have the same devotion to muckraking, Leftist journalism.

Our US empire is in steep decline. In order to wrest complete control over the globe and feed a rapacious thirst for resources and wealth, the American ruling elite is wreaking havoc around the world. Meanwhile, average Americans are suffering, legs trembling under a mountain of debt as they toil at unfulfilling, underpaying jobs. And those with enough time and energy to get angry and fight back are told that the answer is to vote for one of the two pro-war, pro–Wall Street corporate parties claiming to be their savior. This epic tragedy does not sound like the beginning of a joke. But somehow comedian and TV host Lee Camp makes it both funny and interesting. Whether he is setting his sights on the scandal of $21 trillion worth of unaccounted-for financial adjustments at the Pentagon or the scorching environmental and human tragedy caused by climate chaos, it’s unsurprising that one of our most incisive political commentators is technically a comedian. Camp knifes his way through the jungle of fake news, alternative facts, mainstream media lies, and government blackouts, trailblazing a path between Hunter S. Thompson and Jon Stewart. Perhaps the present-day story of America can only accurately be told by a comedian, otherwise no one would believe it. In a world where con men are heralded as leaders, locking up peace activists is perceived as justice, trumpeting state propaganda is considered journalism, and mocking environmentalists is championed as strength, it’s only appropriate that a comedian is viewed as more reliable than the evening news.

Lee Camp is an American comedian, writer, activist, and host and co-creator of the hit comedy news show Redacted Tonight with Lee Camp and Redacted Tonight: VIP on RT America. He’s a former headline writer for The Onion and a former staff humor writer for the Huffington Post. He’s the author of Moment of Clarity and Neither Sophisticated nor Intelligent, and his 2018 stand-up comedy special Not Allowed on American TV has received rave reviews. Jimmy Dore is an American comedian and social critic, producer of The Jimmy Dore Show, and the author of Your Country Is Just Not That Into You. Chris Hedges is an American journalist, Presbyterian minister, and visiting Princeton University lecturer. His books include War Is a Force That Gives Us Meaning, a finalist for the National Book Critics Circle Award and Days of Destruction, Days of Revolt, a New York Times bestseller written with cartoonist Joe Sacco, among others.

"Lee Camp's book Bullet Points and Punch Lines is profound, compelling, and truly hilarious. He has the best comedic mind I've seen since Lenny Bruce, and he combines it with important journalism. I can't recommend this book enough." —Robert Scheer, LA Times journalist and founder of Truthdig