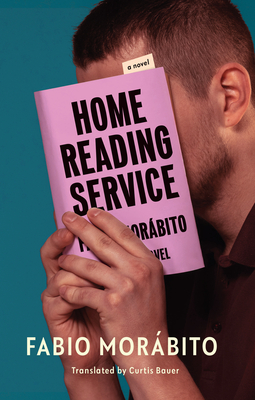 In this poignant novel, a man guilty of a minor offense finds purpose unexpectedly by way of his punishment—reading to others.

After an accident—or “the misfortune,” as his cancer-ridden father’s caretaker, Celeste, calls it—Eduardo is sentenced to a year of community service reading to the elderly and disabled. Stripped of his driver’s license and feeling impotent as he nears thirty-five, he leads a dull, lonely life, chatting occasionally with the waitresses of a local restaurant or walking the streets of Cuernavaca. Once a quiet town known for its lush gardens and swimming pools, the “City of Eternal Spring” is now plagued by robberies, kidnappings, and the other myriad forms of violence bred by drug trafficking.

At first, Eduardo seems unable to connect. He movingly reads the words of Dostoyevsky, Henry James, Daphne du Maurier, and more, but doesn’t truly understand them. His eccentric listeners—including two brothers, one mute, who moves his lips while the other acts as ventriloquist; deaf parents raising children they don’t know are hearing; and a beautiful, wheelchair-bound mezzo soprano—sense his detachment. Then Eduardo comes across a poem his father had copied by the Mexican poet Isabel Fraire, and it affects him as no literature has before.

Through these fascinating characters, like the practical, quick-witted Celeste, who intuitively grasps poetry even though she never learned to read, Fabio Morábito shows how art can help us rediscover meaning in a corrupt, unequal society.

Fabio Morábito was born in Egypt to an Italian family. When he was fifteen, his family relocated from Milan to Mexico City, and he has written all his work in Spanish ever since. He has published four books of poetry, four short-story collections, one book of essays, and two novels, and has translated into Spanish the work of many great Italian poets of the twentieth century, including Eugenio Montale and Patrizia Cavalli. Morábito has been awarded numerous prizes, most recently the Xavier Villaurrutia Prize, Mexico’s highest literary award, for Home Reading Service. His work has been translated into several languages. He lives in Mexico City.

Curtis Bauer is a poet and translator of prose and poetry from Spanish. He is the recipient of a PEN/Heim Translation Fund Grant and a Banff International Literary Translation Centre fellowship. His translation of Jeannette Clariond’s Image of Absence won the International Latino Book Award for Best Nonfiction Book Translation from Spanish to English. Bauer teaches creative writing and comparative literature at Texas Tech University.

“A satisfying fable, at once satiric and soulful, of a literary awakening in Mexico…this idiosyncratic performance will keep its audience rapt.” —Publishers Weekly

“First, the tempting promise of an almost existential discovery, then bewilderment, subtle humor, and then everything in this story that seemed small and simple strikes back with extraordinary resonance. What a pleasure it always is to read Morábito.” —Samanta Schweblin, author of Fever Dream and Mouthful of Birds

“A wonderful addition to the literature of the picaresque, this vivid, original novel depicts the transformative power of literature within a society wrestling with its own social and political mutations.” —Chloe Aridjis, author of Sea Monsters

“I have always considered Morábito’s work my main school of writing. Here, his precise, understated but always satisfying prose is preserved in Bauer’s translation. Home Reading Service has contemporary violence as mere backdrop, and instead gives center stage to the suddenly rarefied acts of reading, of sharing, of paying—or not paying—attention. We are led through a series of quirky households and get to meet the unique underdogs who call them home. A humorous novel that entertains without ever giving up on poetry. A book with soul, despite all the swimming pools.” —Laia Jufresa, author of Umami

“In the tradition of the wittiest and wisest Mexican storytellers such as Jorge Ibargüengoitia, Juan Villoro, and Juan Pablo Villalobos, Fabio Morábito has written a fable about contemporary Mexico that is both hilariously entertaining and soberingly profound. Home Reading Service reads both as a beguiling page-turner and a tender and compassionate elegy about the social unraveling of a country devastated by corruption, organized crime, and collective solitude. Weeks after finishing this slim but muscular novel, I’m still haunted by it.” —Antonio Ruiz-Camacho, author of Barefoot Dogs

“I don’t think you can be a writer of this generation without rolling around in the work of Morábito, who taught us that writing is about playing with sounds. That is what happens in this novel, in which a home reader plays with the different ways of listening of seven families and stumbles between the healing power of words and the passion for literature, while serving a sentence and transforming his life.” —Emiliano Monge, author of Among the Lost and The Arid Sky

“The fascinating story of a man lost in his own thoughts who nevertheless transforms the lives of the people he interacts with. A great novel.” —Sin Embargo