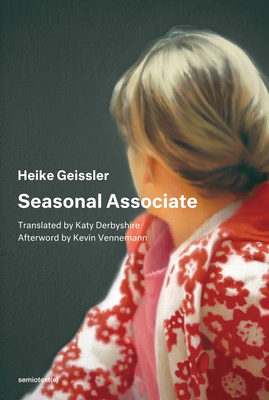 By Heike Geissler, Kevin Vennemann (Afterword by)
$16.95
Possibly out of print. Email or call to check availability and price.

How the brutalities of working life are transformed into exhaustion, shame, and self-doubt: a writer's account of her experience working in an Amazon fulfillment center.

No longer able to live on the proceeds of her freelance writing and translating income, German novelist Heike Geissler takes a seasonal job at Amazon Order Fulfillment in Leipzig. But the job, intended as a stopgap measure, quickly becomes a descent into humiliation, and Geissler soon begins to internalize the dynamics and nature of the post-capitalist labor market and precarious work. Driven to work at Amazon by financial necessity rather than journalistic ambition, Heike Geissler has nonetheless written the first and only literary account of corporate flex-time employment that offers “freedom” to workers who have become an expendable resource. Shifting between the first and the second person, Seasonal Associate is a nuanced expose of the psychic damage that is an essential working condition with mega-corporations. Geissler has written a twenty-first-century account of how the brutalities of working life are transformed into exhaustion, shame, and self-doubt.

...chillingly effective, not least for its accumulation of details, which seem both aggressively banal and freighted with an excess of symbolic meaning....The ubiquitous linguistic debasement and corporate doublespeak is made strange and new again, the small humiliations and injustices pile up along with their psychological and social consequences.—Harper's Magazine—

Geissler's account of her time at Amazon is more than a workplace exposé. Hovering somewhere between memoir, cultural criticism, and fiction, it's a compelling meditation on the psychological and physical harm of working for a large corporation in a society driven by neoliberal economic goals.

...Geissler is exploring questions of labor and identity in the twenty-first century and the ways in which work does and does not define us. If this book was simply a chronicle of her time working at Amazon, it would be compelling enough—but the narrative risks she takes pay off, making it so much more.

...a bleak meditation on 21st-century drudgery.

In its broadest sense, it is a meditation on the psychological impact of precarious modern work, of how it can settle inside your bones and hollow out the things that make you human.

I haven't ever read anything quite like it. The story follows a freelance writer low on cash who takes on a short-term contract at Amazon's Leipzig warehouse through the winter season. If you're interested in precarious work, the gig economy and how to find a language that accurately describes the emotional landscape of modern work, then this is for you!