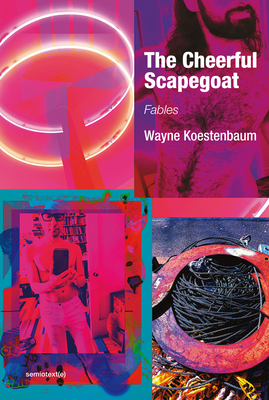 Koestenbaum's fables travel in circles, slipping away from their original point and leading the reader to a paradisiacal suspension of fixed categories. Intensified sentences and curlicue narratives scheme together mesmerically to convince the reader to abandon old ways of thinking and to take on a commitment to the polymorphous, the wandering, the tangential. Koestenbaum's fables--emergency bulletins uttered in a perverse vernacular of syntactic pirouettes--alert us to the necessity of pushing language into new contortions of exactitude and ecstatic excess.

Wayne Koestenbaum--poet, critic, novelist, artist, performer--has published nineteen books, including The Queen's Throat, which was praised by Susan Sontag as "a brilliant book" and was a National Book Critics Circle Award finalist. Formerly an Associate Professor of English at Yale and a Visiting Professor in the Yale School of Art's painting department, he is a Distinguished Professor of English, French, and Comparative Literature at the CUNY Graduate Center in New York City.

"These charmingly insouciant short stories by the noted critic, poet and essayist exhibit the same surreal whimsy that distinguishes his work in other formats."—New York Times Sunday Book Review

"Koestenbaum sucks every last drop of nectar out of words, like an avid hummingbird at its flowers, then hovers over sentences so exquisitely precise, bejewelled and hilarious -- just fall back already into the glistening boners and coruscating silvergrass. (Is that Ashbery or Laura Riding lying deep in flora beside you?) Surrender yourself to the engorged astonishments of these fables."—Guy Maddin, filmmaker

"Wayne Koestenbaum derails the sexual and gender conventions of the genre of the mystical-and-mythical-style fable using trans and queer speculative porn-fiction and lyrical criticism. Narratively exquisite and fiercely irreverent, his fables construct a brilliant one-of-a-kind mind-body-game where literature becomes a sort of “operation” in the unconscious infrastructure of our desire. Strikingly original, tender, radical, funny, unforgettable."—Paul B. Preciado, author of An Apartment on Uranus and Testo Junkie

"Wayne Koestenbaum's marvelous Cheerful Scapegoat is festooned with beaucoup celebs from today's fables and those of centuries past, including Marxists ("sexually speaking"), torch singers, forgotten Hollywood stars, Greek heroes and unknown kings. Each story mercifully eschews the conventional Aesopian tale, often in a fabulously cheeky mode, where every maxim or moral strives for “vaudeville grandeur” rather than tidy meaning. While gorgeous and funny, Koestebaum’s stories movingly graze the human only to kiss the divine, often “with the melancholy that only an unfinished cigarette has the effrontery to epitomize.” This book is something rare, something new."—Andrew Durbin, author of Skyland

"This is an elegant, rude book—beautiful and acerbically composed. Like scenes scripted by Edward Gorey and directed by Ryan Trecartin, Wayne Koestenbaum’s brief parables manage to be at once delicate and extreme, vile and flowery, cooly precise and gorgeously insane. I don’t know anyone else who writes like this."—Lucy Ives, author of Loudermilk: Or, The Real Poet; Or, The Origin of the World

"Do you, Dear Reader, crave some dark wit with your titillation, a little salt in your cocktail, a love-bite with your Benjamin? Do you prefer not to solve love? Do you prefer paste to rarity? Rot to profit? Monica Vitti? Between Streisand and Wilde, would you rather not choose? In the eruditely amoral tradition of Guy Davenport, here are elegant tales which invite new lascivious forms of attention. You will not be glum. Each sentence has a fabulous mouthfeel. You’ll be imbued with a fresh capaciousness. You will find that each can be adored."—Lisa Robertson, author of The Baudelaire Fractal