I Could Not Believe It: The 1979 Teenage Diaries of Sean DeLear (Paperback) 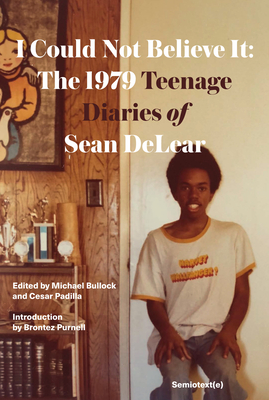 A remarkable time capsule of Simi Valley, 1979, written before the author would become one of LA’s most influential artists of subsequent decades.

DeLear would go on to become the frontman for the Los Angeles punk/powerpop band Glue. He was a punk musician, visual artist, intercontinental scenester, video vixen, party host, marijuana farmer, and sometime-collaborator of artists such as Kembra Pfahler and Vaginal Davis.

DeLear’s forgotten diaries capture a moment in Los Angeles underground and queer history when, as his friend the writer Cesar Padilla notes, “It wasn’t cool at all to be trans, gay, queer or whatever. Those words weren’t even in the vocabulary.” I Could Not Believe It, Padilla continues, “is a raw fearless innocent gay Black kid’s journey coming out into life at an incredible pre-AIDS period. It’s not cognizant of being literature. It’s as naïve and forthcoming as it gets. It wasn’t written with the desire to be published so Sean didn’t hold back. Sean’s goal was to be true to himself.”

Sean DeLear (1965–2017) was an influential member of the “Silver Lake scene” of Los Angeles’ 1980s and 1990s before moving to Europe. In Vienna, he became part of the art collective Gelitin and devised a solo cabaret show, Sean DeLear on the Rocks. DeLear was a cultural boundary breaker whose work transcended sexuality, race, age, genres, and scenes. As Lina Lecaro wrote in the LA Weekly, “Sean DeLear epitomized everything that ever made me want to write about Los Angeles nightlife … He was Los Angeles royalty.”

Brontez Purnell is a writer, musician, dancer, filmmaker, and performance artist. He is the author of a graphic novel, a novella, a children's book, and the novel Since I Laid My Burden Down. The recipient of a 2018 Whiting Writers' Award for Fiction and the 2022 Foundation for Contemporary Arts Robert Rauschenberg Award, he was named one of the thirty-two Black Male Writers of Our Time by T: The New York Times Style Magazine in 2018. Born in Triana, Alabama, he's lived in Oakland, California, for more than a decade.