Jaxx and The Beanstalkers: Once After a Time (Paperback) 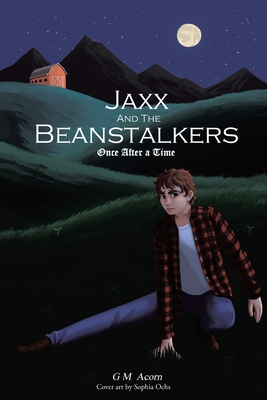 Once after a time...

Jaxx is just about to turn eighteen. Jaxx's thoughts tend to wander. Jaxx doesn't always pay a lot of attention to detail.

He's just a normal teenager with an unusual family history. Well, he thinks he's normal anyway. His friends kid him a lot about his famous great-grandfather. No one believes in the old stories about Grandpa Jack climbing a beanstalk and defeating a giant.

His parents finally think Jaxx is grown-up enough to run the farm his mother inherited from Grandpa Jack, her grandfather. He's hoping his new responsibilities will encourage his friends to give him more respect and forget about all that fairy-tale nonsense. Jaxx loved Grandpa Jack, but now that he's older, he realizes those stories were only make-believe to impress children and fools. Jaxx still feels a bit like an outsider in this beautiful British mountain valley. He's lived here for seven of his eighteen years. He's only half English, you see. His American half makes him a target for more joshing from his British pals. His accent and language amuse them, but it's all in good fun.

All things considered, Jaxx is content. Sometimes he wishes his life were more exciting, but he loves the farm. He works hard, stays fit, and gets to spend his free time in the village with his friends.

Jaxx's luck hasn't been too good lately. He's looking forward to his birthday celebration at the pub. Maybe his luck will change for the better once he turns eighteen. Probably not. Jaxx just isn't that lucky.

Dear reader, it's time to let you in on a secret. Jaxx doesn't know his luck is about to change...for the worse He's about to be thrust into a world he couldn't even imagine. A world of magic, danger, and challenges. A world of impossibilities. A world he may never be able to escape.