You're Leaving When?: Adventures in Downward Mobility (Hardcover) 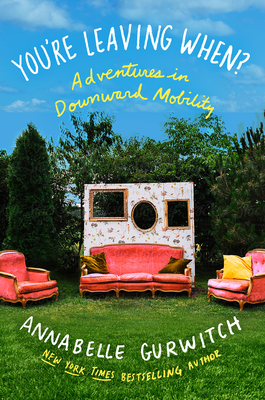 By Annabelle Gurwitch
$26.00
Possibly out of print. Email or call to check availability and price.

Finalist for the Thurber Prize for American Humor

"In this surprisingly upbeat memoir, Annabelle Gurwitch writes about the financial curveballs that can hit you in midlife . . . Somehow, Ms. Gurwitch manages to find humor in these setbacks. Ultimately, this is a story about harnessing resilience and learning how life’s disappointments can teach you about the things that matter most." —Tara Parker-Pope, The New York Times

From the New York Times bestselling author of I See You Made an Effort comes a timely and hilarious chronicle of downward mobility, financial and emotional.

With signature "sharp wit" (NPR), Annabelle Gurwitch gives irreverent and empathetic voice to a generation hurtling into their next chapter with no safety net and proves that our no-frills new normal doesn't mean a deficit of humor.

In these essays, Gurwitch embraces homesharing, welcoming a housing-insecure young couple and a bunny rabbit into her home. The mother of a college student in recovery who sheds the gender binary, she relearns to parent, one pronoun at a time. She wades into the dating pool in a Miss Havisham-inspired line of lingerie and flunks the magic of tidying up.

You're Leaving When? is for anybody who thought they had a semblance of security but wound up with a fragile economy and a blankie. Gurwitch offers stories of resilience, adaptability, low-rent redemption, and the kindness of strangers. Even in a muted Zoom.

ANNABELLE GURWITCH is an actress, activist, and New York Times bestselling author of I See You Made an Effort (a Thurber Prize finalist). Other books: Wherever You Go, There They Are; You Say Tomato, I Say Shut Up (with Jeff Kahn); and Fired! (also a Showtime Comedy Special). She’s written for The New Yorker, The New York Times, Los Angeles Times, The Oprah Magazine, The Wall Street Journal, and Hadassah Magazine amongst other publications and is currently adapting You're Leaving When? for HBO with Bill Maher executive producing, centering on her Los Angeles Times op-ed about hosting an at-risk housing insecure couple in her home which was recognized with a 2020 Los Angeles Press Club excellence in journalism award. Gurwitch was the longtime co-host of Dinner & a Movie on TBS; a regular commentator on NPR; host of WA$TED for the Discovery Channel, the news anchor of HBO’s award-winning Not Necessarily the News, and a resident humorist for TheNation.com. Her acting credits include: Seinfeld, Murphy Brown, Boston Legal, Dexter, and Melvin Goes to Dinner. She performs on the Moth Mainstage, Carolines on Broadway, and at arts centers around the country. Gurwitch thought she'd be empty nesting by now; instead, she lives with her cat and child—a college graduate of the COVID class of 2020. She co-hosts the Tiny Victories podcast on the Maximum Fun Podcast Network, which Vulture called a “bright spot of light and laughter in 2020.”

Finalist for the Thurber Prize for American Humor

A Good Morning America Must-Read Book of the Month

“Annabelle Gurwitch is so funny that, even when bad things happen, she writes about them in a brilliantly entertaining way.” —Dave Barry

"Everyone needs a friend to guide them through the American middle class in decline, and you couldn't do better than Annabelle Gurwitch. She is sharp-eyed, un-foolable, and hilarious." —Barbara Ehrenreich

"In this surprisingly upbeat memoir, Annabelle Gurwitch writes about the financial curveballs that can hit you in midlife . . . Somehow, Ms. Gurwitch manages to find humor in these setbacks. Ultimately, this is a story about harnessing resilience and learning how life’s disappointments can teach you about the things that matter most." —Tara Parker-Pope, The New York Times

"In her new collection of essays, You’re Leaving When? Adventures in Downward Mobility, she writes with hilarious poignancy about tackling midlife malaise on an austerity budget." —Los Angeles Magazine

" Reading . . . 'You’re Leaving When?' will most likely feel like a long, intimate chat with your funniest friend . . . Collections of funny essays are everywhere these days, often penned by celebrities and comedians. But unlike some of the stars who manage to get away with meandering 'observations,' Gurwitch connects deeply with both a life stage—middle age—and our current cultural moment . . . Gurwitch is a very entertaining writer and she is best when she’s telling her own story in her own funny voice." —Samantha Schoech, San Francisco Chronicle

"[Gurwitch] trains a skeptical eye on her era’s foibles in the manner of a Dorothy Parker, leavens it with the housefrau elan of an Erma Bombeck, and spices it with her own witty, irrepressible personality . . . She can be as deadly tackling the siren song of consumer culture, the pervasiveness of wellness fads and the travails that beset middle-age women as she is on homelessness, social inequities, economic vulnerability, and the inevitable sacrifices of a life in the arts. Yet all with a breezy touch, delivering the occasional razor-sharp bon mot." ––Bill Thompson, Charleston Post and Courier

"In her sixth book, You’re Leaving When? Adventures in Downward Mobility, Annabelle Gurwitch goes where many women fear to tread, sharing hilarious, gut-punching midlife moments with her signature wit and honesty. Taboo topics — loss of identity, sex, divorce, financial fears, finding your teen’s drug stash!—are laid bare and you’re drawn to her like the woman at a cocktail party who blurts out exactly what you’re thinking, but are too afraid to say." —Danielle Manion, AARP's The Girlfriend

"There’s a valuable universality throughout Gurwitch’s work, thanks to her sharp sense of humor and complete lack of shame . . . You can take some solace that you are (far from) alone in your plight, and if you’re lucky you can laugh about it as well." —Gwen Ihnat, The A.V. Club

"Annabelle Gurwitch is funny. She is wry, witty, and a master of the bon mot . . . Her new book gathers a series of connected essays that will make you laugh out loud." ––Diana Wagman, Alta

"Droll, self-deprecating Gurwitch is very funny––like Rhoda Morgenstern on The Mary Tyler Moore Show, but delivering not so much one-liners or gags as stories that shift life’s viewfinder. Misadventures in the gig economy, fashions, wellness fads, and parenting might sink another writer, but Gurwitch’s wit, warmth, and generosity universalize them." —The National Book Review

"While her general take on all this is humorous, she writes with empathy and knowledge that her situation is nowhere near rock bottom. There are also many heartfelt moments, especially surrounding her nonbinary child. This is mostly fun stuff, but it's also honest, confronting difficult and unexpected situations that many middle-aged women may find themselves in. Gurwitch is an excellent companion to navigate the fraught future with." —Booklist

"Erma Bombeck meets Dorothy Parker in this topical and often laugh-out-loud funny take on our modern malaise . . . Gurwitch possesses an appealingly cockeyed sense of humor, and she offers incisive takes on consumer culture and our contemporary confusions and lighthearted (though pointed) opinions on the travails that beset many middle-age women. In a consistently engaging narrative rich with personal anecdotes, the author pokes fun at her misadventures in love, work, and home maintenance, but she also addresses other pressing matters—economic vulnerability in the gig economy, social inequities, raising nonbinary children, friendship, homelessness, wellness fads, the challenges of a life in the arts, and the mysteries of Zoom—with a similarly breezy touch that is surprisingly effective . . . Gurwitch is a likable exemplar of the I’d-rather-laugh-about-it-than-cry-about-it philosophy." —Kirkus Reviews

"Gurwitch can find humor practically anywhere . . . By turns bittersweet and hilarious, these spot-on musings will strike a chord with anyone stuck in a spot of bother." —Publishers Weekly

"Gurwitch’s perspective on both the major and the mundane will be relatable to anyone who understands how the American Dream has devolved into a fever dream . . . Her stories are as personal as they are universal . . . The latest from Gurwitch will have readers rolling with laughter one minute and picking up the phone to commiserate with friends or family the next. The author is a delightful eccentric aunt-to-all with her wit, caring, and unbeknown-to-her wisdom. For fans of Nora Ephron and Sloane Crosely alike." —Library Journal

"Gen X was promised the American Dream but instead found downward mobility, job insecurity, and non-stop caregiving. In her timely essays about boomerang kids, pandemic coworking, and post-divorce dating, Annabelle Gurwitch mines our generational ill luck for humor and insight as only a resilient latchkey kid can: with an arched brow and a gimlet eye." —Ada Calhoun, author of the New York Times bestseller Why We Can't Sleep: Women's New Midlife Crisis