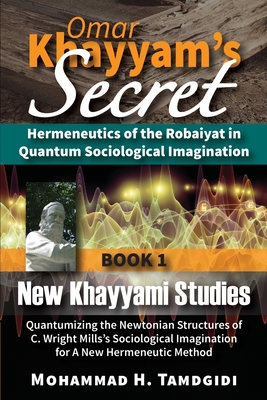 Omar Khayyam's Secret: Hermeneutics of the Robaiyat in Quantum Sociological Imagination is a twelve-book series of which this book, subtitled New Khayyami Studies: Quantumizing the Newtonian Structures of C. Wright Mills's Sociological Imagination for A New Hermeneutic Method, is the first volume. Each book is independently readable, although it will be best understood as a part of the whole series.

In the overall series, the transdisciplinary sociologist Mohammad H. Tamdgidi shares the results of his decades-long research on Omar Khayyam, the enigmatic 11th/12th centuries Persian Muslim sage, philosopher, astronomer, mathematician, physician, writer, and poet from Neyshabour, Iran, whose life and works still remain behind a veil of deep mystery. Tamdgidi's purpose has been to find definitive answers to the many puzzles still surrounding Khayyam, especially regarding the existence, nature, and purpose of the Robaiyat in his life and works. To explore the questions posed, he advances a new hermeneutic method of textual analysis, informed by what he calls the quantum sociological imagination, to gather and study all the attributed philosophical, religious, scientific, and literary writings of Khayyam.

In this first book of the series, following a common preface and introduction to the series, Tamdgidi develops the quantum sociological imagination method framing his hermeneutic study in the series as a whole. In the prefatory note he shares the origins of this series and how the study is itself a moment in the trajectory of a broader research project. In his introduction, he describes how centuries of Khayyami studies, especially during the last two, have reached an impasse in shedding light on his enigmatic life and works, especially his attributed Robaiyat.

The four chapters of the book are then dedicated to developing the quantum sociological imagination as a new hermeneutic method framing the Khayyami studies in the series. The method builds, in an applied way, on the results of Tamdgidi's recent work in the sociology of scientific knowledge, Liberating Sociology: From Newtonian Toward Quantum Imagination: Volume 1: Unriddling the Quantum Enigma (2020), where he explored extensively, in greater depth, and in the context of understanding the so-called "quantum enigma," the Newtonian and quantum ways of imagining reality. In this first book, he shares the findings of that research in summary amid new applied insights developed in relation to Khayyami studies.