60 Stories About 30 Seconds: How I Got Away With Becoming a Pretty Big Commercial Director Without Losing My Soul (Or Maybe Just Part of It) (Hardcover) 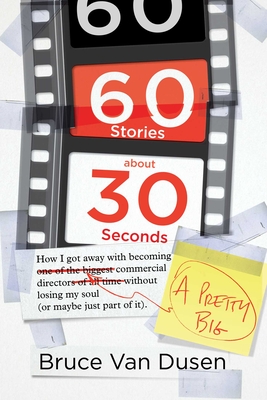 You’ve probably seen more movies made by Bruce Van Dusen than any other director alive.

1977. New York City. Cool and crime-ridden, cheap and wild. Bruce Van Dusen shows up in town with a film degree and $150 to his name. He wants to make movies. So he does. The only ones anyone will pay him to make? Little ones. Thirty seconds long. Commercials. He has no idea what he’s doing and the money sucks. But he’s a director.

He quickly learns he has the two things he needs to succeed in the fickle world of commercial-making: a talent for telling short, emotional stories, and the hustle to fight for every job no matter how small. He still has no idea what he’s doing—not that anyone needs to know that. He just keeps making it up as he goes along.

He gets hired by a client on life support in the most depressing hospital in New York. Gets peed on by a lion. Abused by Charles Bronson. Explains peristalsis to a Tony winner. Makes a movie and goes to Sundance. Goes back to little movies when it bombs. Keeps hustling, shooting anything. Gets married, has kids. Pushes, shoves, survives. Gets divorced. Survives some more. Is an asshole, pays the price, finally learns when and how to be an asshole and becomes one of the industry’s stars.

Years go by and it’s not what he expected. It’s harder, weirder, and funnier. But it worked out. It worked out great, actually.

Bruce Van Dusen directed his first commercial when he was twenty-three. He’s gone on to direct a thousand more. He also directed three movies and a feature documentary. Being a director is a weird gig. When you work, you give orders, and people and objects do what you tell them. When you’re not working, you still give orders, but nobody listens. Born in Detroit, Van Dusen lives in New York City.

"Written by a man who describes himself as 'a toxic mix of insecure and headstrong,' 60 Stories About 30 Seconds is a joyful romp—a mix of stories about idiotic mistakes, surprising successes, and business and life lessons well-learned. Reading it is about as much fun as you can possibly have while sitting quietly and learning new stuff."
— Richard Davies, Former ABC News Radio Anchor, Co-host of "How Do We Fix It?"