They Are Already Here: UFO Culture and Why We See Saucers (Hardcover) 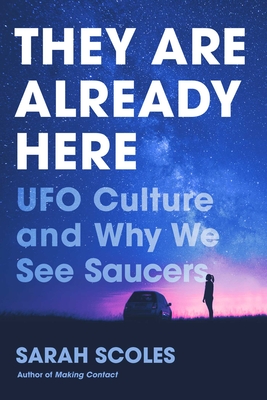 By Sarah Scoles
$27.95
Possibly out of print. Email or call to check availability and price.

An anthropological look at the UFO community, told through first-person experiences with researchers in their element as they pursue what they see as a solvable mystery—both terrestrial and cosmic.

More than half a century since Roswell, UFOs have been making headlines once again. On December 17, 2017, the New York Times ran a front-page story about an approximately five-year Pentagon program called the Advanced Aerospace Threat Identification Program. The article hinted, and its sources clearly said in subsequent television interviews, that some of the ships in question couldn’t be linked to any country. The implication, of course, was that they might be linked to other solar systems.

The UFO community—those who had been thinking about, seeing, and analyzing supposed flying saucers (or triangles or chevrons) for years—was surprisingly skeptical of the revelation. Their incredulity and doubt rippled across the internet. Many of the people most invested in UFO reality weren’t really buying it. And as Scoles did her own digging, she ventured to dark, conspiracy-filled corners of the internet, to a former paranormal research center in Utah, and to the hallways of the Pentagon.

We will travel along the Extraterrestrial Highway (next to Area 51) and visit the UFO Watchtower, where seeking lights in the sky is more of a spiritual quest than a “gotcha” one. We meet someone who, for a while, believes they may have communicated with aliens. Where do these alleged encounters stem from? What are the emotional effects on the experiencers?

Funny and colorful, and told in a way that doesn’t require one to believe, Scoles brings humanity to an often derided and misunderstood community. After all, the truth is out there . . .

Sarah Scoles is a science writer whose work has appeared in The Atlantic, Slate, Smithsonian, the Washington Post, Scientific American, Popular Science, Discover, New Scientist, Aeon, and Wired. A former editor at Astronomy magazine, Scoles worked at the National Radio Astronomy Observatory, the location of the first-ever SETI project. She lives in Denver, Colorado.

“The truth is out there, and They Are Already Here:UFO Culture and Why We See Saucers takes you right to its doorstep. Add this sharp, thoughtful book to your collection.”
— Popular Mechanics, “The Best Space Books of 2020 (So Far)”

“Scoles maintains her position as an outsider journalist making sense of the intricate stew of conspiracy theory, spectacle and kitsch. Scoles marries a thoughtful objectivity with a warm subjectivity as she talks to serious-minded UFO report investigators, tour guides for ET sightseers, and movers and shakers in the UFOlogy community.”
— The Washington Post

“Inspired by the U.S. government’s acknowledgment of a program to investigate UFO encounters, Scoles delivers a nonjudgmental, level-headed look at a long-lasting societal phenomenon. Scoles remains an open-minded skeptic, and it’s this objectivity that makes her buoyant survey so delightful to read.”
— Publishers Weekly

"While many authors in this realm rely on sensationalism and avoid fact-checking, Scoles has written the definitive investigation into the origins of UFO culture and its persistence."
— QUARTZ

Sarah Scoles has gone to some pretty far-out places and talked to a lot of extraordinary people. She wants to understand not just the people who believe in UFOs, but why they believe. Scoles deftly explores the human need to believe in something; something beyond us.
— Jill Tarter

"A fascinating journey; the depth of [Scoles's] research is impressive and her curiosity is infectious."

“Framed for skeptics just as much as believers…and will also appeal to those of us who enjoy spending time in nature and staring up at the sky. Scoles deftly gets to the heart of what we feel when we think we’ve connected with something sent from the greater universe: whatever’s out there, maybe it wants to know us and be known, and the experience of discovery makes us special.”
— Outside

"Scoles’s biography deftly and entertainingly tells the story of groundbreaking scientist Jill Tarter, whose work has been pivotal to SETI. Making Contact astutely highlights the nuances and challenges of being a female scientist at the time, a heroic achievement in itself. Tarter's story reminds us to keep pursuing answers to pivotal scientific questions, regardless of the ideological barriers."
— Physics Today (Praise for MAKING CONTACT)

"Tarter emerges as both heroic and all too human. To paraphrase the poet Robert Browning, humanity’s reach must exceed its grasp, or what are the heavens for?"
— Nature (Praise for Making Contact)

"Scoles shares the fantastic story of people willing to pursue a quixotic goal in the face of daunting odds."
— Publishers Weekly (Praise for Making Contact)

"Scoles—who has clear affection for her subject—highlights Tarter’s tenacity. A detailed portrait of how the science sausage gets made."
— Science News (Praise for Making Contact)

"An admiring, insightful biography. Scoles has done her homework, so readers will both understand and sympathize with Tarter, who has become an icon and role model despite pursuing a goal she knows she will never achieve."
— Kirkus Reviews (Praise for Making Contact)