The NBA in Black and White: The Memoir of a Trailblazing NBA Player and Coach (Hardcover) 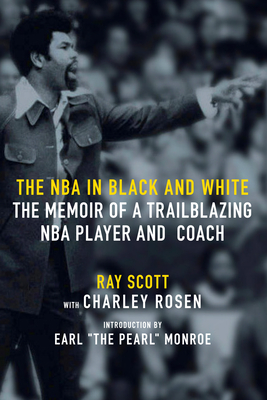 A memoir of hard lessons learned in the racially segregated and sometimes outright racist NBA of the early ‘60s by celebrated NBA player and the first Black Coach of the Year, Ray Scott. Introduced by Earl "the Pearl" Monroe.

“There’s a basic insecurity with Black guys my size,” Scott writes. “We can’t hide and everybody turns to stare when we walk down the street. … Whites believe that their culture is superior to African-American culture. ... We don’t accept many of [their] answers, but we have to live with them.”

Ray Scott was part of the early wave of Black NBA players like Bill Russell, Wilt Chamberlain, and later Kareem Abdul-Jabbar, who literally changed how the game of professional basketball is played—leading to the tremendously popular financial blockbuster the NBA is today. Scott was a celebrated 6’9” forward/center after being chosen by the Detroit Pistons as the #4 pick of the 1961 NBA draft, and then again after he was named head coach of the Pistons in October 1972, winning Coach of the Year in the spring of 1974—the first black man ever to capture that honor.

Scott’s is a story of quiet persistence, hard work, and, most of all, respect. He credits the mentorship of NBA player and coach Earl Lloyd, and talks about fellow Philly native Wilt Chamberlain and friends Muhammad Ali and Aretha Franklin, among many others. Ray has lived through one of the most turbulent times in our nation’s history, especially the time of assassinations of so many Black leaders at the end of the 1960s. Through it all, his voice remains quiet and measured, transcending all the sorrows with his steadiness and positive attitude. This is his story, told in collaboration with the great basketball writer, former college player and CBA coach Charley Rosen.

Philly native John Raymond “Ray” Scott's college career began at the University of Portland, and he was chosen as the 4th pick in the 1961 NBA draft by the Detroit Pistons. He spent six years with the Pistons, as a stand-out rebounder and deadly shooter from the perimeter, and another five years playing for other teams. Then in October 1972, Scott was promoted from Assistant to Head Coach of the Detroit Pistons, thanks in part to the strong support from retiring coach Earl Lloyd who, a decade earlier had scouted Scott and recommended that he be the Pistons top pick. Two years later he was named NBA Coach of the Year, the first African-American to win the coveted award. From 1976 to 1979, Scott was Men’s Basketball Head Coach at Eastern Michigan University. Today, Ray lives with his family in Eastern Michigan, not far from Detroit. This is his first book. Charley Rosen is one of the most respected writers of books on basketball, including both fiction like NYT Notable Book The House of Moses All-Stars, and nonfiction like his telling of the Jack Molinas story in The Wizard of Odds. He has also been a sports commentator, at FOXSports.com and HoopsHype.com. He lives in Woodstock, N.Y.

"Scott, who became the first Black coach to be named NBA Coach of the Year in 1974, delivers a moving reflection on his influential career. . . . Fans of the sport will relish Scott’s insights, including how the game’s been changed by the emphasis on three-point shooting. . . . a valuable addition to hoops history."
—Publishers Weekly

"This is a truly wonderful book that reveals the difficulties of the quota system and all the other obstacles that African American NBA players had to face when the league began to integrate in the mid-1950's and beyond. It also tells how Ray and many other great Black players managed to achieve the fulfillment of their respective talents. Indeed, Ray was the rare successful NBA player who became a successful NBA coach. Along the way, the plight of 'ordinary' Black citizens who succeeded and/or tragically failed in facing their own racial barriers is addressed. Above all, Ray's honesty, intelligence, and deep understanding of how social injustice influences every aspect of all our collective and individual lives, makes this narrative totally relevant today. There's enough wisdom in here to enlighten and inspire even people who have little or no interest in basketball. Incredibly powerful—a must read."
—Hubie Brown, NBA Coach of the Year (1978, 2004), member of Basketball Hall of Fame


"I first met Ray Scott in 1965 when I was a rookie player for the Detroit Pistons. I was scared to death of the challenges I faced trying to make it in the NBA, but Ray welcomed me to the team. As one of the veterans, he organized all the players to work out and prepare for camp together. It meant the world to me, and I have never forgotten how he treated me. Ray's book brought back so many good memories from my NBA days. He was and is a leader and a wonderful example of how we should all respect, get along, and love each other. Ray is a good man."
—Tom Van Arsdale, twelve-year NBA player, three-time All Star


"Ray Scott has chronicled his four-decades-long basketball odyssey beautifully. It is a thoughtful and well-written book about the transforming landscape of the NBA. He shares his firsthand knowledge and experiences and adds value to an era not so often discussed. I have been blessed to have known Ray, and blessed even more to have someone who trudged through the early days of the NBA, take me along with him for the journey." —Marques Johnson, twelve-year NBA player, five-time All Star