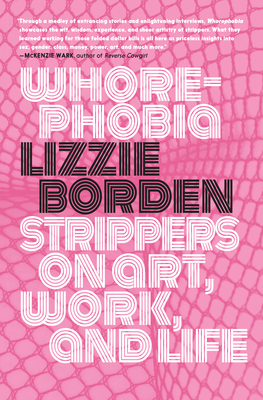 No one knows more than strippers about being looked at: as objects of desire, objects of curiosity, as angels or Jezebels or hookers with hearts of gold. In this anthology, twenty-three dancers whose careers span decades, geographies, and identities demand to be seen. Through stories from first nights on the job to the day they hung up their sky-high heels—or decided they never will—these writers offer glimpses into lives of camaraderie and celebration, joy, pride, despair, frustration, self-doubt, and fear.

Their unfiltered perspectives on their lives, onstage and off, are a powerful counternarrative to the whorephobia that shrouds the conventional portrayals of strippers in crime movies, TV shows, music videos, newspaper articles, and legislative debates. Each of these illuminating essays and interviews peels away tired myths and salacious speculation and presents the naked truth: that sex work is real work and strippers are real people.

LIZZIE BORDEN is a writer, director, editor, and script consultant. Her film Born in Flames, named one of “The 50 Most Important Independent Films” by Filmmaker magazine, has been shown at countless festivals and theaters domestically and internationally. It has been taught and written about extensively since its 1983 premiere at the Berlin Film Festival. In 2016 when it was restored by Anthology Film Archives, New Yorker critic Richard Brody called Born in Flames “a feminist masterpiece.”

Borden also wrote, directed, and produced the controversial independent fiction film Working Girls, which premiered at the Cannes Film Festival in the Directors’ Fortnight, won a US Dramatic Special Jury Recognition at the Sundance Film Festival, and was restored by the Criterion Collection in 2021.

Anthology Film Archives recently restored Borden’s long-unseen first film, Regrouping, an experimental documentary about women’s groups. Film critic Melissa Anderson called it “combative, entropic, mesmerizing.” Regrouping, along with Born in Flames, will also be acquired by the Criterion Collection. Borden is currently in production on Rialto, a feature about women’s freedom of choice set in the early 1950s against the background of McCarthyism.

"Filmmaker Borden presents a diverse and authentic anthology of autobiographical essays by strippers. Drawing on her experiences making the 1986 feature film Working Girls, Borden begins with stories focused on New York City strip clubs in the 1980s and ’90s, where women made a precarious living by dancing on stage and persuading customers to enter seedy VIP rooms. As the collection progresses, however, Borden includes more recent and unusual accounts, including Reese Piper’s musings on how her autism is sometimes easier to navigate as a stripper than it is in regular life; the Incredible, Edible Akynos’s reflections on the sex industry and Blackness; and AM Davies’s stories of performing sex work as an amputee. Each piece is paired with an interview—conducted by Borden or another contributor—with the author (or someone close to her if she has died), providing intriguing details about each performer’s background and offering a window into the supportive relationships among sex industry peers. Most of the women featured are activists, writers, or artists, and they excel at narrating their own stories and evoking the atmosphere of the clubs and digital spaces where they’ve performed. The result is a humane, multidimensional portrait of an industry typically shrouded in artifice and shame."
—Publishers Weekly

"Through a medley of entrancing stories and enlightening interviews, Whorephobia showcases the wit, wisdom, experience and sheer artistry of strippers. What they learned working for those folded dollar bills is all here as priceless insights into sex, gender, class, money, power, art and much more."
—McKenzie Wark, author of Reverse Cowgirl

"Strippers share stories of romps and riots, hard times and hard cash, shame and solidarity. This book is for everyone who wants to understand the success and struggle of women—some who have not survived—in the licit or quasi-legal sex industry.”
— Melissa Hope Ditmore, author of Unbroken Chains: The Hidden Role of Human Trafficking in the American Economy and editor of the Encyclopedia of Prostitution and Sex Work.

"A vivid, raucous, and disquieting set of stories told from the point of view of [mostly] 'art girls' dancing in go-go and topless clubs. Fleeing low-paying women’s work in service, retail, and office sectors, the girls treat stripping as side hustle to support their own writing, dancing, or photography while also making it material for their art."
— Judith Walkowitz, Professor of History at Johns Hopkins University, author of Nights Out: Life in Cosmopolitan London

“Millions of words have been written about the sex trades, but Whorephobia offers something much rarer and more valuable: a collection of beautifully written first-person essays by women who do the actual work. For readers who don’t know much about the sex industries, these essays will shock and educate. But those in the know will find the eloquent, funny, and powerful voices of these women thrilling and profound.”
—Debby Applegate, Pulitzer Prize–winning author of Madam: The Biography of Polly Adler, Icon of the Jazz Age

“Delightful and memorable, Lizzie Borden’s wide-ranging collection shows us what has changed about the stripper experience over fifty years and what remains the same today. The intellectual and creative power on display in these pages will leave you in awe.”
—Gretchen Soderlund, author of Sex Trafficking, Scandal, and the Transformation of Journalism, 1885-1917

“Lizzie Borden and her collaborators/contributors bring an extraordinary ordinariness to the intimate economy. Here are the tools, the training, the skill, the workplace conditions and pay, the discipline and punishment, the quirks, and necessary illusions. Forget straitjacket tropes of empowerment or victimization; here are stories of working life, its magic and melancholy, pride and repression, its pleasures and dangers. Here is a book about sex and solidarity, the fraught alpha and omega of human existence.”
—JoAnn Wypijewski, author of What We Don’t Talk About: Sex and the Mess of Life