The Greatest Evil is War (Hardcover) 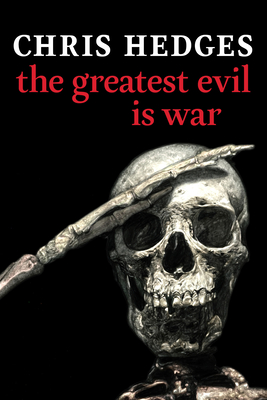 An unflinching indictment of the horror and obscenity of war by one of our finest war correspondents.

Drawn from experience and interviews by Pulitzer-prize-winner Chris Hedges, this book looks at the hidden costs of war, what it does to individuals, families, communities and nations.

In fifteen short chapters, Chris Hedges astonishes us with his clear and cogent argument against war, not on philosophical grounds or through moral arguments, but in an irrefutable stream of personal encounters with the victims of war, from veterans and parents to gravely wounded American serviceman who served in the Iraq War, to survivors of the Holocaust, to soldiers in the Falklands War, among others. Hedges reported from Sarajevo, and was in the Balkans to witness the collapse of the Soviet Union.

In 2002 he published War Is a Force that Gives Us Meaning, which the Los Angeles Times described as “the best kind of war journalism… bitterly poetic and ruthlessly philosophical” and the New York Times called “a brilliant, thoughtful, timely, and unsettling book.” In the twenty years since, Hedges has not wanted to write another book on the subject of war—until now, with the outbreak of war in Ukraine. It is important again to be reminded who are the victors of the spoils of war and of other unerring truths, not only in this war but in all modern wars, where civilians are always the main victims, and the tools and methods of war are capable of so much destruction it boggles the mind. This book is an unflinching indictment of the horror and obscenity of war by one of our finest war correspondents.

CHRIS HEDGES was a war correspondent for two decades in Central America, the Middle East, Africa, and the Balkans, fifteen of them with The New York Times, where he was awarded the Pulitzer Prize. He is the author of fourteen books, including War is a Force That Gives Us Meaning, What Every Person Should Know About War and his latest, Our Class: Trauma and Transformation in an American Prison. The passages in this book are taken from his writings on war, primarily from Truthdig and ScheerPost, over the past twenty years, as well as from numerous talks and lectures. He writes a column every Monday for ScheerPost and has a show, The Chris Hedges Report, on The Real News. He holds a Master of Divinity from Harvard University and has taught at Columbia University, New York University, Princeton University and The University of Toronto. He has taught students earning their college degree from Rutgers University in the New Jersey prison system since 2010. You can find him at chrishedges.substack.com.

“Chris Hedges has compiled a remarkable record of reporting and analysis. He has been an incomparable source of insight and understanding, both in his outstanding career as a courageous journalist and in his penetrating commentary on world events. This is a contribution of great significance in these troubled times.”
—Noam Chomsky

"Savage honesty is a hallmark of everything Chris Hedges writes. Other writers seek to comfort or distract; his purpose is to agitate, unsettle, and demand moral accountability. The Greatest Evil Is War is no exception, which is precisely why every American should read it and reflect on its disturbing message."
⏤Andrew Bacevich, author of After the Apocalypse: America's Role in a World Transformed

"Hedges refuses to reside in the abstract, creating instead a book about war that is meant to be experienced viscerally. . . . His book is nothing short of a gut punch."
⏤Jake Whitney, The Progressive

"Journalist Hedges (Our Class) delivers a blistering condemnation of war in all forms and for all reasons. Opening the book with a forceful condemnation of the U.S. government’s role in provoking the Russian invasion of Ukraine by breaking its promise not to expand NATO into Central and Eastern Europe, Hedges draws on his experiences as a war correspondent in Bosnia, Kosovo, Sierra Leone, and elsewhere to paint a visceral portrait of the horrors of combat and its physical and psychological aftereffects. Throughout, he fiercely condemns the 'war industry' for prolonging conflicts and U.S. politicians and journalists for using “bellicose rhetoric” to demonize enemies and elevate allies into 'demigods.' Some of the book’s most powerful pieces draw on the firsthand testimonies of soldiers and their loved ones, including a former U.S. Army Ranger who speaks eloquently of how indoctrination into military culture made him 'want to deliver death,' and the father of a Marine killed by a sniper in Iraq. Elsewhere, Hedges lets personal aggrievements distract from his larger points, as when he complains that the Kremlin-funded news channel RT America, where he had a show, was shut down in response to the invasion of Ukraine. Though not all its provocations land, this spiky treatise deserves to be reckoned with."
—Publishers Weekly

"The Greatest Evil is War is an excellent common read pick.  At SUNY Oneonta, our common read is, by design, related to issues of diversity, equity, and social justice. Past selections have been made in an effort to stimulate conversation around such issues as race and racism, mass incarceration, and immigration. Chris Hedges’s book gives a voice to the silenced population of wounded veterans and the civilian victims of war. Of all the issues so frequently discussed in contemporary classrooms and on campuses, perhaps the most neglected is what Hedges calls our “permanent war” and the many victims of the culture and economy that support permanent war. Furthermore, perhaps more fully than most of our past titles, The Greatest Evil is War promises to generate vigorous debate, especially as it relates to competing narratives explaining the war in Ukraine and the U.S. war in Iraq."
—George Hovis, Professor, Department of English, SUNY Oneonta