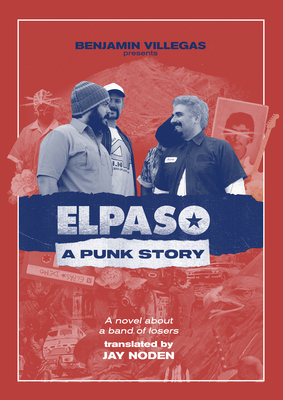 This Latinx local-legend proto-grunge band may or may not have existed, but Benja Villegas, the author of this book, traveled to El Paso (from Spain) to document their history and he uncovers a lot: demos, flyers, and their hardscrabble stories that paved the way for the likes of Nirvana, even though they themselves barely made it out of El Paso.

In 2015, Benjamin Villegas traveled to Texas in an attempt to write the biography of a music group that could have changed the history of rock: ELPASO, a Chicano band from the U.S.-Mexico border with a punk sensibility, a long since-defunct crew, and little left to remember it by but a suitcase of fanzines and one-off recordings.

This is the story of one of the many bands that will never appear in rock n' roll history books, but is at the core of the scene; a band that earned its stripes from sweaty fans and self-taught rock aficionados in basements, garages, and small venues across the country. This is the story of two kids who came together to embrace the punk ethos of the 80's and be a part of the rock n' roll revolution sweeping the US, a world of the Ramones, Black Flag, and, of course, ELPASO.