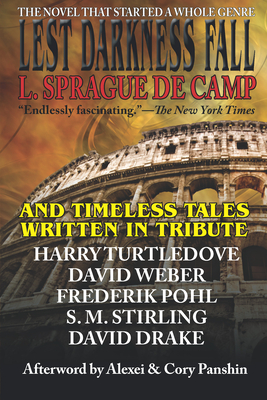 Rarely do books have such a great influence on a genre as Lest Darkness Fall has had on science fiction. Frequently quoted as one of the favorite books of many of the masters in this genre, this book by L. Sprague de Camp helped establish alternate-history as solid sub-genre of science fiction.

An indication of the influence and longevity of the book is by the number of best-selling writers who have written stories in direct response to, or influenced by, Lest Darkness Fall. The original tribute volume (titled Lest Darkness Fall and Related Stories, reprinted three such stories by Frederik Pohl, David Drake and S. M. Stirling written over a period of forty-three years--a testament to the timelessness of the book.

Similar, thematically, to Mark Twain's A Connecticut Yankee in King Arthur's Court, the book tells the tale of Martin Padway who, as he is walking around in modern Rome, is suddenly transported though time to 6th Century Rome.

L. Sprague de Camp was a student of history (and the author of a number of popular works on the subject). In Lest Darkness Fall he combines his extensive knowledge of the workings of ancient Rome with his extraordinary imagination to create one of the best books of time travel ever written.

This volume also includes an afterword by Alexei and Cory Panshin, adapted from their Hugo-winning book on science fiction, The World Beyond the Hill.

L. Sprague de Camp L. Sprague de Camp is a key figure in science fiction and best known for his highly influential book Lest Darkness Fall which not only impacted many future giants of the industry, it was also responsible for the establishment of alternate history as a solid subgenre. Alternate history has seen a huge increase in popularity in recent years with major media productions like The Man in the High Castle (Amazon's hit series based on the book by Philip K. Dick). His body of work is marked by interests in linguistics, ancient history, philosophy, and plausible scientific extrapolation. He wrote several books related to time travel and alternate history in which challenged conventional notions of how history is created by arbitrary acts, instead arguing about the importance of technological determination in shaping history. He explored these notions in detail in many of his books, and a number of his books on the subject, including Lest Darkness Fall, are considered seminal works of alternate history and time travel. While the term extraterrestrial was first used by H.G. Wells in connection with life beyond Earth, de Camp is credited with both using it as a noun to describe alien life as well as for creating the abbreviation E.T. in the first part of his two-part article, "Design for Life" published in Astounding Science Fiction. Many subsequent bestselling authors in science fiction and fantasy have cited de Camp's work as having a major influence on them, including David Weber, David Drake and Frederik Pohl. L. Sprague de Camp was a guest of honor at the 1966 World science fiction convention, was named a Gandalf Master of Fantasy at the 1976 convention (after J.R.R. Tolkien and Fritz Leiber) and a Grandmaster of science fiction by the Science Fiction Writers of America (SFWA) in 1979. He also accumulated a plethora of awards, including a Special Achievement Sidewise Award for Alternate History in 1996, citing 'seminal works in the field.' He was born in New York City in 1907 and married Catherine Adelaide Crook in 1939. They moved to Plano, Texas in 1989. Both he and Catherine died within months of each other in 2000. Their ashes share a columbarium niche together at Arlington National Cemetery. Frederick Pohl Frederik Pohl is the author of the classic science fiction novel Gateway which was followed by later books that now comprise the Heechee collection. He is considered one of the premier science fiction writers of the twentieth century with several bestsellers to his name. Along with commercial success, his works also met with wide critical acclaim. He won multiple Hugo and Nebula awards throughout his career both for short stories as well as novels. He was made a Grandmaster by the Science Fiction Writers of America (SFWA) in 1993 and was inducted into the Science Fiction Hall of Fame in 1998. He also received the J. W. Eaton Lifetime Achievement Award from the University of California Riverside Library which houses the Eaton Collection of Science Fiction and Fantasy. Frederik Pohl was born in New York City in 1919 and died in Palatine, Illinois in 2013. David Drake David Drake is a Vietnam war veteran who used his military experience to create an extremely successful series of military science fiction series called the Hammer's Slammer stores. The setting is called the Slammers universe or the Hammerverse. The series (and the universe) is named after the first book in the series, a collection of short stories titled Hammer's Slammers (with the pivotal character of Colonel Alois Hammer). David utilizes both is own military experience as well as inspirations drawn from historical or mythological stories to create his stories. Being one of the first to write a popular military science fiction series, David Drake is now considered a major figure in the genre and helped establish many of the norms future writers have followed. David was born in Dubuque, Iowa in 1945. S.M. Stirling S.M. Stirling is an award-winning Canadian-American science fiction author specializing in alternate history and time travel books. He is well known in the subgenres for his Draka and Nantucket series. Many of his books are conflict driven, military adventures. He also uses his works to explore value systems and cultural and historical influences. Stirling was bon in Metz, France in 1963 and currently lives in New Mexico with his wife Jan. Alexei Panshin Alexei Panshin is a science fiction writer as well as a science fiction historian and critic. His novel, Rite of Passage won a Nebula award and this study of science fiction, The World Beyond the Hill won a Hugo Award. Alexei was born in 1940 and currently lives with his wife Cory (who co-authored with him on several of his works, including The World Beyond the Hill) in Quakertown, Pennsylvania. Harry Turtledove Dubbed as "The Master of Alternate History" by Publishers Weekly, Harry Turtledove has written a number of classic bestsellers in the subgenre, including How Few Remain, The Guns of the South and The Man with the Iron Heart. He uses his study of history (with a Ph.D in Byzantine history) to create alternate worlds in intricate detail; crafting enthralling adventures that have garnered him high critical praise as well as making him one of the most successful bestselling authors in alternate history. Turtledove has won, or been nominated, for nearly every major award in science fiction (multiple times, for many) including the Hugo, Nebula, Sidewise (alternate history), Homer (short stories), The John Esten Cooke Award for Southern Fiction and the Prometheus Award. Harry Turtledove is married to novelist Laura Frankos. They have three daughters, Alison, Rachel and Rebecca. David Weber David Mark Weber (born October 24, 1952) is an American science fiction and fantasy author. He has written several science-fiction and fantasy books series, the best known of which is the Honor Harrington science-fiction series and has had a number of New York bestsellers. His books are also a regular selection for the Science Fiction Book Club.