If Trees Could Testify...: A novel based on the true story of Madison County's infamous Gahagan murders (Paperback) 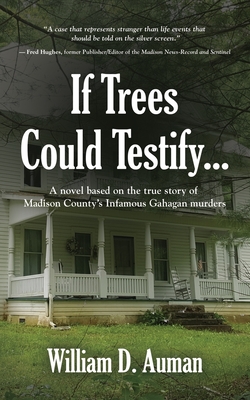 IF TREES COULD TESTIFY... is a historical mystery novel based on the true story of Madison County's infamous Gahagan murders. The homicides occurred near the Appalachian mountain town of Marshall, North Carolina, known by some as the "Jewel of the Blue Ridge," but known by locals to be "a block wide, a mile long, sky high and hell deep." The French Broad River bisects the town, which harbors both ghosts from Civil War events and the lore of mermaids.

On a quiet summer night in 1983, two elderly siblings were tragically murdered in their colonial, Georgian-style home across from Big Laurel Creek. Known for their distrust of banks and having a collection of antiques, gold, and silver coins, it was naturally assumed that robbery was the principal motive for the double homicide. The murders captivated a close-knit rural community for nearly two decades, as the local family roots of the victims dated all the way back to the early 1800s.

During the years that followed the senseless tragedy, a time during which the home was boarded up and abandoned, local folks rumored that they had occasionally seen the house lit up like a Christmas tree at night. There were also stories where the ghost of an elderly woman, walking and swinging a lantern, was reportedly seen along the highway which runs adjacent to the property. Some county residents have further claimed to have seen this apparition standing in a window on the second floor of the home during the time that it was vacant.

Suspects came and went as the case investigation spanned three different sheriff administrations. "Who done it" rumors abounded, with theories of involvement ranging from organized crime to outlaw biker gangs to even local family members. Finally, almost eighteen years after the murders, warrants were issued charging a father and two of his sons with having committed the crimes. The defendants maintained their innocence throughout the course of the legal proceedings, which blazed a trail of intrigue with numerous twists and turns along the way.

According to Fred Hughes, at the time the publisher and editor of the Madison News-Record and Sentinel, a Hollywood film crew was interested in producing a major motion picture based on the case. As noted in a subsequent editorial, Hughes was "reasonably certain" that the story could have made the silver screen, as it was full of "stranger than life events."

This book should be categorized as a fictional mystery novel which is based on the true story of the murders and subsequent prosecution of those accused. Names have been changed to protect the innocent (as well as the potentially guilty), and a haunting tale is told with a focus on the search for justice for both victims and defendants. Colorful characters, including the draft-dodging son of a snake-handling minister, intertwine with more serious undertones as a surprise ending eventually unfolds. The author, William Auman, was the principal defense attorney in the actual case, and provides the reader with a dramatic and informative account of what was otherwise a tragedy to many.