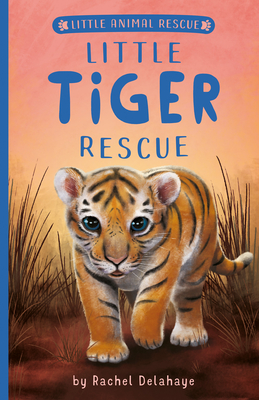 In this new chapter book series, Little Animal Rescue, what starts out as a birthday party at a trampoline park ends up becoming an exciting adventure as Callie magically finds herself in a rain forest in India where she finds a tiger cub who has been separated from its family. Includes black and white illustrations throughout.

When Callie volunteers to help at her cousin's birthday party at an indoor trampoline park, she doesn't expect to end up in a rain forest in India! And if that isn't exciting enough, she soon makes a new friend -- a tiny tiger cub, left behind when its family escaped a flood. The little tiger is bursting with energy, and Callie can't believe her luck -- she's playing with an actual tiger cub! But as the flood water rises, the time for games is running out. In order to save her new feline friend, Callie must face monsoons, dangerous creatures, and the darker side of nature....

In the Little Animal Rescue series, join Callie on her magical adventures to rescue wild animals in danger all around the world!

After studying linguistics, Rachel Delahaye began a career in print journalism. She has worked in London, England, Sydney and Melbourne, Australia and now lives in Bath, England. While she has vowed never to move again (well, not for a little while), her imagination has refused to settle down, and she is now writing children's fiction. Rachel is married with two children and a dog named Rocket.

Suzie Mason is a digital illustrator who works from a little cottage in the Midlands of England, where she lives with her husband and ball-of-fuzz kitty. She loved art as a child but ended up following a scientific path, studying Astrophysics and then Medical Imaging. Suzie could never shake the art bug however, and in her mid twenties she began to learn digital art, which she had always admired. Realizing that art what was she wanted to do with her life, she became a full-time artist in 2017.