Dune: The Duke of Caladan (Paperback) 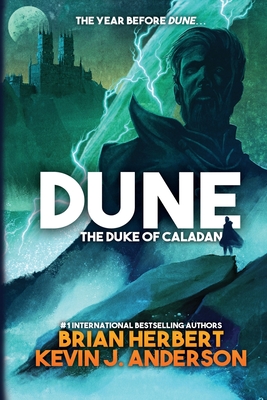 By Brian Herbert, Kevin J. Anderson
$17.99
Possibly out of print. Email or call to check availability and price.

In the year before Frank Herbert's Dune, pivotal events set the stage for the creation of a legend-Leto Atreides, the Duke of Caladan, and his son Paul, who would be known as Muad'Dib. The web of treachery includes the Bene Gesserit Sisterhood, the evil Baron Harkonnen, and even Emperor Shaddam himself.

While Leto tries to raise Paul to be a worthy leader, a deadly new drug from the deep forests of Caladan spreads and kills ... a dark stain on Atreides honor.

At the same time, a revolutionary movement seeks to destroy the Corrino empire that has stood for ten thousand years. With increasing desperation, this rebellion turns to acts of unspeakable violence. And one rebel leader will stop at nothing to recruit Leto to their cause.

Can Duke Leto survive with his legendary honor-and his family-intact?

The Duke of Caladan tells the intertwined stories of some of the most revered characters in science fiction.