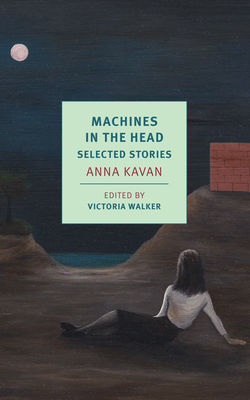 Enter the strange and haunting world of Anna Kavan, author of mind-bending stories that blend science fiction and the author's own harrowing experiences with drug addiction, in this new collection of her best short stories.

Anna Kavan is one of the great originals of twentieth-century fiction, comparable to Leonora Carrington and Jean Rhys, a writer whose stories explored the inner world of her imagination and plumbed the depths of her long addiction to heroin. This new selection of Kavan’s stories gathers the best work from across the many decades of her career, including oblique and elegiac tales of breakdown and institutionalization from Asylum Piece (1940), moving evocations of wartime from I Am Lazarus (1945), fantastic and surrealist pieces from A Bright Green Field (1958), and stories of addiction from Julia and the Bazooka (1970). Kavan’s turn to science fiction in her final novel, Ice, is reflected in her late stories, while “Starting a Career,” about a mercenary dealer of state secrets, is published here for the first time.

Kavan experimented throughout her writing career with results that are moving, funny, bizarre, poignant, often unsettling, always unique. Machines in the Head offers American readers the first full overview of the work of a fearless and dazzling literary explorer.

Anna Kavan (1901-1968), born Helen Emily Woods, was a British writer and painter. She attended the London Central School of Arts and Crafts during the 1920s, which was also the period in which her heroin use, which continued intermittently until her death, began. In 1940, she began publishing under "Anna Kavan," the name of one of her fictional characters. During this period her writing became darker and more experimental, and her first collection of stories Asylum Piece was well received. She went on to work as a secretary at the literary journal Horizon, where she also contributed stories, articles, and reviews. She became reclusive, struggling with poor health and difficulty in publishing, until 1967, when her best-known novel Ice was published. Kavan died of heart failure the following year.

Victoria Walker is the chair of the Anna Kavan Society. She teaches in the English Department at Queen Mary, University of London.

"Entering this haunting realm, the reader will crave to plunge deeper into her metallic and poetically surreal universe." —Patti Smith

"It is the cool lucid light of that unique mind which makes her Anna Kavan . . . There is nothing else like her writing . . . She is one of the most distinctive twentieth-century novelists." —Doris Lessing

"Kavan’s talent for extracting an austere beauty from intimations of doom is as compelling here as in so much of her greatly admired work." —Rhys Davies

"If you love J.G. Ballard, you should read Anna Kavan." —Chris Power, The Guardian

“[T]hese stories—written over three decades—offer a fascinating study of a writer who was always evolving and are exceptional as literature qua literature. . . . A writer fans of experimental fiction should know.”  —Kirkus Reviews

"[H]auntingly relevant and entirely alien . . . Dark tales deserve their day too, and with Machines in the Head, it's clear Kavan is one of the greats.” —Zack Ruskin, Shelf Awareness

"Kavan wrote some of the twentieth century’s most haunting and original fiction . . . To those cultish fans who see Kavan’s marginality as central to her glamour, mainstream acceptance may be unwelcome. But for this most imaginative and otherworldly of writers, whose plots seamlessly merge fantasy and reality, past and future, life and death, nothing could be more apt than a cross-century literary resurrection." —Emma Garman, The Paris Review

"A writer of hypnotic power and imagination." —The Times Literary Supplement

“Written between 1940 and her death, these stories are dark [and] strikingly written . . . Some have much of the fantastic about them. . . . there’s more than a suggestion of Kafka about Kavan.” —Andrew Stuttaford, The New Criterion