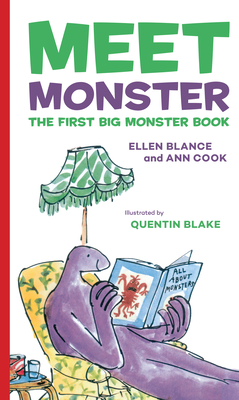 Monster is curious about making friends, finding a home, and exploring his city. This book collects six Monster stories—written by educators Ellen Blance and Ann Cook, who worked with children to write the books—brought to life by Quentin Blake's charming illustrations.

Have you met Monster? He’s not scary or mean like other monsters. He’s kind of tall and his head is skinny, and he’s purple. He’s curious about everything: the city, the river, houses, cars, trains, and what people look like, the park, the kids, the swings, the stores and clothes and stuff. It is all new to him. “Monster thinks the city is fine so he thinks he will live here.” So begins the story of gentle, playful Monster, who conducts himself with grace and courtesy, and in short order finds a home, a best friend, and a bunch of kids to play with.

First introduced in 1973, Monster returns in this omnibus edition of the first six stories of an extended emerging-reader series written not only for children, but also by them. Educators Ellen Blance and Ann Cook worked with schoolchildren to write stories a child would want, and be able, to read. While most children’s books are meant to be read by adults to children, these are stories children can read to themselves or to adults. The book includes illustrations by the illustrious Quentin Blake, and a new letter to children (and one to parents) by the authors.

Ellen Blance grew up in the northeast of England. She moved to London in 1964 and attended the University of London in order to study alternative methods of developing language and reading skills for children. In 1970 she was invited to work with New York City teachers. She taught classes at the New School and at City College. Ellen joined the staff at Bank Street College where she worked on the desegregation of the Stamford, Connecticut, schools. She also worked with teachers in Mamaroneck and Rye Brook, New York. Now retired, Ellen spends some time in New York City and Connecticut schools reading the Monster books and talking about writing to enthusiastic young writers.

Ann Cook works with children and teachers in New York City public schools. She directs a consortium of schools that have replaced standardized testing with performance assessment, allowing students to demonstrate their knowledge and skills. She is the author of three series of books for beginning readers and of numerous articles for adults about child-centered education and teacher collaboration. A collector of children’s books, she particularly enjoys reading to her five grandchildren.

Quentin Blake is one of the most celebrated children’s book illustrators working today, having illustrated more than three hundred books by such authors as Russell Hoban, Joan Aiken, and Roald Dahl. A prolific writer of books for children himself, he was appointed the first Children’s Laureate of England in 1999.

"I am delighted that Monster is out and about again as lively and beautifully coloured as ever, and making lots of new friends of all kinds.” —Quentin Blake

“[This] series of learn-to-read books starring a friendly, lanky, purple monster became a sensation with students and teachers in the 1970s and ’80s . . . [E]ven after many years, they feel fresh in their category.” —Shannon Maughan, Publishers Weekly

“This gentle, playful monster like no other first came on the scene in 1973, thanks to educators Ellen Blance and Ann Cook, who had the bright idea to let schoolchildren help bring Monster to life. He’s back in this omnibus edition, featuring the first six stories in their easy-reading magnificence, marvelously illustrated by Sir Quentin Blake from the equally brilliant minds at [New York Review Books].” —Colin McDonald, Publishers Weekly

"I suspect that, secretly, [Quentin Blake] probably does have a magic pencil . . . he defies the limits of the visual by evoking sound: saucepans crash, birds screech, flutes toot. His hairy monsters, weird animals, knowing children and baffled adults threaten to leap off the paper. Noses point, arms flap, legs twist at impossible angles . . . Movement, freedom, escape are of the essence. And in every case, the open line and feeling of improvisation allow readers space to let their own imagination work on how characters might look and behave." —Jenny Uglow, The Guardian