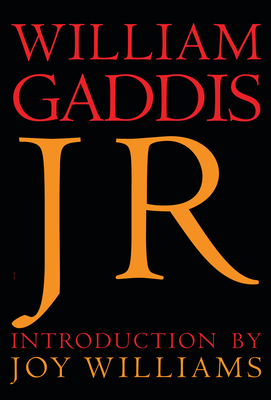 A National Book Award-winning satire about the unchecked power of American capitalism, written more than three decades before the 2008 financial crisis.

At the center of J R is J R Vansant, a very average sixth grader from Long Island with torn sneakers, a runny nose, and a juvenile fascination with junk-mail get-rich-quick offers. Responding to one, he sees a small return; soon, he is running a paper empire out of a phone booth in the school hallway. Everyone from the school staff to the municipal government to the squabbling heirs of a player-piano company to the titans of Wall Street and the politicians in Washington will be caught up in the endlessly ballooning bubble of the J R Family of Companies.

First published in 1975 and winner of the National Book Award in 1976, J R is an appallingly funny and all-too-prophetic depiction of America’s romance with finance. It is also a book about suburban development and urban decay, divorce proceedings and disputed wills, the crumbling facade of Western civilization and the impossible demands of love and art, with characters ranging from the earnest young composer Edward Bast to the berserk publicist Davidoff. Told almost entirely through dialogue, William Gaddis’s novel is both a literary tour de force and an unsurpassed reckoning with the way we live now.

A 1982 MacArthur Fellow and two-time winner of the National Book Award, William Gaddis (1922-1998) was the author of five novels: The Recognitions, J R, Carpenter's Gothic, A Frolic of His Own, and, published posthumously, Agapē Agape.

Joy Williams is the author of several novels, including The Quick and the Dead, which was a finalist for the Pulitzer Prize, and several story collections, including The Visiting Privilege. She was inducted into the American Academy of Arts and Letters in 2008.

“Just as it’s possible to read The Recognitions narrowly as a satire of midcentury bohemia, J R operates on one level as a send-up of American capitalism. . . . But the book is more profoundly a portrait of a world that has given up on transcendent values. . . . The coherence of the vision, the order that Gaddis imposes on the chaos of his material through sheer force of artistic will, offers the closest thing to redemption this world allows, and gives the book, finally, a poignant hopefulness. . . . I count my second time through [The Recognitions and J R]—like my first—among the great literary experiences of my life.” —Christopher Beha, Harper’s Magazine

“No other novel I know of catches up so much of contemporary reality, or renders it so exactly, and with such telling detail.” —George Stade, The New York Times Book Review

“J R is a wild, rollicking success. It deserves the buzz and marketing budget typically reserved for writers who receive seven-figure advances. It deserves an army of dedicated readers who will, with near-religious devotion, take the time to unlock the wonders and mysteries of this hilarious, brilliant, and punishing satire of American capitalism. More than almost anything being published by young or established writers today, J R is the novel of our age.” —Lee Konstantinou, Los Angeles Review of Books

“Their surfaces will seem daunting but look beyond these novels’ haughty, hefty façades. Once you get to know them inside, they’re much more fun than they look. They will make you laugh out loud. They will absorb you. They will keep you coming back for more. . . . while Gaddis’ characters spend a lot of time saying nothing, they are always intriguingly human characters worth knowing over and over again. Which is what makes these perfect lockdown preoccupations. . . . Everything you need to know about life is bubbling away under the covers of these two world-size books.” —Scott Bradfield, Los Angeles Times

“I read J R, and it seemed to me, at first, that Gaddis was working against his own gifts for narration and physical description, leaving the great world behind to enter the pigeon-coop clutter of minds intent on deal-making and soul-swindling. This was not self-denial, I began to understand, but a writer of uncommon courage and insight discovering a method that would allow him to realize his sense of what the great world had become. J R in fact is a realistic novel—so unforgivingly real that we may fail to recognize it as such.” —Don DeLillo

“William Gaddis is pure prodigy. His novels are massive in ambition and dazzling in execution. They are fierce with integrity.” —Mary McCarthy

"Gaddis’s work encourages us both to watch the show and to consider the man behind the curtain, the life that both exceeds and requires the novel. J R is not really “about” an eleven-year-old who dupes everyone; it is about the outrage of a larger consciousness at the dehumanization of corporate life." —Greg Gerke, Kenyon Review

“He [Gaddis] is an heir to Eliot, whose quests, imposters and enervated landscapes haunt his novels, as well as the great Russians—Dostoevsky, Gogol, Tolstoy, Chekhov, Turgenev—with whom he shared the hope of civilizing a benighted nation.” —Dustin Illingworth, The Point

“A satirical farce on the supercharged American version of capitalism. . . There is no centre stage in J R, and that’s part of the point: the world of money is a hall of mirrors that will reflect and distort anything or nothing.” —Adam Mars-Jones, London Review of Books