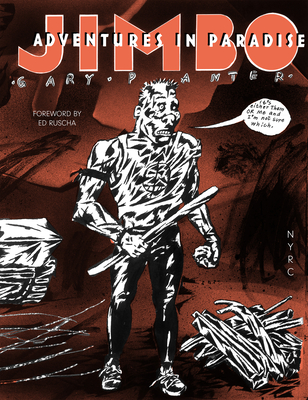 By Gary Panter, Nicole Rudick (Afterword by), Ed Ruscha (Foreword by)
$29.95
Possibly out of print. Email or call to check availability and price.

A futuristic punk ventures through a madcap, dystopian fantasia in this astounding work of comics literature by a celebrated artist and illustrator.

Gary Panter is one of America’s great creative forces: the illustrator for the trailblazing punk magazine Slash, set designer for the legendary TV show Pee-wee’s Playhouse, and one of the wildest, most innovative comics artists of all time. Jimbo: Adventures in Paradise is a leap into the uproarious life of Panter’s ever-cheerful punk everyman, Jimbo, and a perfect introduction to Panter’s ever-shifting style. Amid a jumbled cityscape of rundown New York City streets and futuristic Los Angeles freeways, Jimbo crowd-surfs at a riot, makes amends with Ernie Bushmiller’s Nancy, and rescues his pal Smoggo’s sister from giant cockroaches, all while the world teeters between extravagance and apocalypse.

Veering from the crude to the elegant, the wise to the funny, Jimbo: Adventures in Paradise proves Panter is a master of cartooning, and still way ahead of the rest of us.

Gary Panter is a highly influential comics artist, painter, illustrator, and designer. He helped shape the visual identity of the 1970s punk scene in Los Angeles and was a key contributor to Raw magazine in the 1980s. A three-time Emmy winner for his set designs for Pee-wee's Playhouse, he received the Chrysler Award for Design Excellence in 2000 and a Pollock-Krasner Foundation grant in 2014.

Ed Ruscha is one of the most influential American artists of the postwar era. Renowned for his experimentations with text and image and the repurposing of graphic design elements in his art, he lives and works in Los Angeles, CA.

Nicole Rudick is a critic and editor. She has written widely on art, literature, and comics for The New York Review of Books, The New York Times, The New Yorker, Artforum, the Poetry Foundation, and elsewhere. She was managing editor of The Paris Review for nearly a decade and edited two issues of the magazine as well as The Writer's Chapbook: A Compendium of Fact, Opinion, Wit, and Advice from "The Paris Review" Interviews.

“Gary Panter is deeply good, wise, and humble, despite possessing an inimitable sense of line and color, an extraterrestrial imagination, and a direct pipeline to his kid self. I’d say he was my role model if I could only aspire that high.” —Luc Sante

“Jimbo: Adventures in Paradise is a Panter essential, a comics game changer, and one of my absolute favorites of his many mind-altering masterpieces. Punk rock becomes a symphony, panels blend and create an abstract pool, both shocking and refreshing.” —Leslie Stein

“Is Jimbo: Adventures in Paradise another mind-blowing, oversized masterpiece from the legendary ink-spattered Gary Panter? I say yes. And I also say: Collect Them All!” —Matt Groening

“[Gary Panter’s paradise] may be hectic and gross, but it’s also lively and comic and kinetic and crawling with ideas. . . [Jimbo is] a reminder, too, that late twentieth-century American culture was so rich even its dystopian nightmares were feasts.” —Jackson Arn, Art in America