Three Rings: A Tale of Exile, Narrative, and Fate (Paperback) 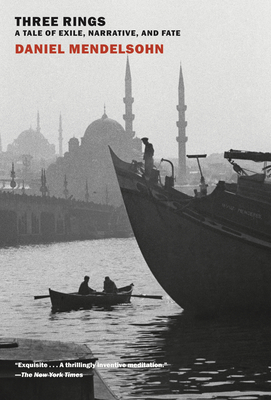 A memoir, biography, work of history, and literary criticism all in one, this moving book tells the story of three exiled writers—Erich Auerbach, François Fénelon, and W. G. Sebald—and their relationship with the classics, from Homer to Mimesis.

In a genre-defying book hailed as “exquisite” (The New York Times) and “spectacular” (The Times Literary Supplement), the best-selling memoirist and critic Daniel Mendelsohn explores the mysterious links between the randomness of the lives we lead and the artfulness of the stories we tell. Combining memoir, biography, history, and literary criticism, Three Rings weaves together the stories of three exiled writers who turned to the classics of the past to create masterpieces of their own—works that pondered the nature of narrative itself: Erich Auerbach, the Jewish philologist who fled Hitler’s Germany and wrote his classic study of Western literature, Mimesis, in Istanbul; François Fénelon, the seventeenth-century French archbishop whose ingenious sequel to the Odyssey, The Adventures of Telemachus—a veiled critique of the Sun King and the best-selling book in Europe for a hundred years—resulted in his banishment; and the German novelist W.G. Sebald, self-exiled to England, whose distinctively meandering narratives explore Odyssean themes of displacement, nostalgia, and separation from home.

Intertwined with these tales of exile and artistic crisis is an account of Mendelsohn’s struggle to write two of his own books—a family saga of the Holocaust and a memoir about reading the Odyssey with his elderly father—that are haunted by tales of oppression and wandering. As Three Rings moves to its startling conclusion, a climactic revelation about the way in which the lives of its three heroes were linked across borders, languages, and centuries forces the reader to reconsider the relationship between narrative and history, art and life.

Daniel Mendelsohn is a frequent contributor to The New Yorker and The New York Review of Books, where he is Editor-at-Large. His books include the memoirs An Odyssey: A Father, a Son, and an Epic and The Lost: A Search for Six of Six Million, a translation of the poetry of Constantine Cavafy, and three collections of essays and criticism, most recently Ecstasy and Terror: From the Greeks to Game of Thrones. A professor of Humanities at Bard College, he is the director of the Robert B. Silvers Foundation.

“Exquisite . . . Three Rings digresses from its digressions, whirling with elegiac elegance from the ‘Odyssey,’ which itself veers away from the main tale only to wind home again . . . Ornate and oneiric, the results are well worth circling and circling back to. A thrillingly inventive meditation.” —The New York Times Book Review

“Daniel Mendelsohn’s Three Rings is erudition, essayism, and memoir, made to dance together like a visible clockworks—or literary scholarship such as Ricky Jay might have practiced it onstage. This little book is ruminative, humane and gorgeously precise.” —Jonathan Lethem

“Mr. Mendelsohn’s eighth full-length work is itself a book that springs from other books, including his own. It is a brief but bountiful mashup of criticism, literary biography, craft essay and personal history. As always, the author’s voice blends authority with considerable warmth and charm, luring readers into his complex intellectual enthusiasms. . . . Three Rings, a short but profoundly moving work, clings with tenacity to a belief in the regenerative power of literature.” —The Wall Street Journal

“A stunning piece of criticism . . . Three Rings is not just a continuation of An Odyssey, a mere expansion on a theme. Something has changed in the new book. You might say that between An Odyssey and Three Rings, the question of ring composition shifts from a literary concern to a metaphysical one. The stakes in this new book have been raised: this isn’t just about the mechanics of storytelling but the fabric of the cosmos.” —James K. A. Smith, Literary Hub

“This slim volume swirls with Daniel Mendelsohn’s sublime reflections on history, architecture, religion, theater, literature, scholarship, and on his own life. To read it is like spending a few hours with a brilliant, captivating conversationalist whose ardor for his subjects is contagious. It’s an intellectual adventure, and a brilliant achievement.” —The Jewish Book Council Review

“[Mendelsohn is] a gifted guide. . . . He performs digression in this slim volume, and he does so with grace and power. In other words, he provokes readers to ponder our own lives even as he instructs us in the narrative traditions we might use to make sense of ourselves.” —Tablet

“This luminous narrative, in which the tales of each of Mendelsohn’s three chosen exiled writers appealingly intertwine, is about many things—memory, literature, family, immigration, and religion . . . This slender, exquisite book rewards on many levels.” —Kirkus Reviews (starred review)

“A fine study of digression, exile, and circularity. Mendelsohn’s talent with descriptive detail brings his work alive, such as repeated descriptions of Auerbach, while exiled in Istanbul, gazing through a palace window over the turquoise Sea of Marmara. Mendelsohn never fails to entertain as he takes the reader across thousands of years’ worth of literature and lives.” —Publishers Weekly

“Astounding. A Borgesian document of clarity and brilliance, a book about telling stories that wanders down the seeming two roads of the Hebrew tradition and the Classical, which, like Proust’s two ways, might turn out to be one way after all. Three Rings has the keeled force of a long poem.” —Sebastian Barry

“Contained in the interwoven circles of this slim, labyrinthine book is a vision that encompasses the world. Part dirge, part memoir, part exegesis, all rhapsody—Mendelsohn’s anatomy of literature’s subtlest pleasures is itself that subtlest of literary pleasures: a masterpiece.” —Ayad Akhtar, Pulitzer Prize-winning author of Homeland Elegies