The Turbulent Sea: Passage to a New World (Paperback) 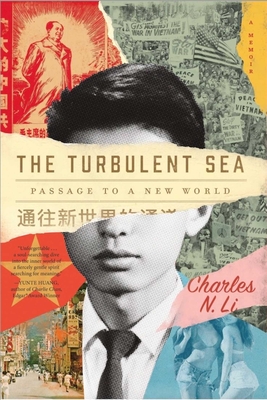 A young teen escapes to America from Mao’s China in the early 60s and experiences the consequent culture shock of cruel racism, financial hardships, unexpected freedom, bewildering sexual mores, and the aching rejection and loneliness that so many immigrants face. Swept up in the 1960s antiwar movement in a pacifist and law-abiding way, Li is persecuted by the American law enforcement and immigration authorities. Timely and relevant for today’s enlightened anti-racist views.

In The Bitter Sea, Charles Li’s unforgettable coming of age memoir, Li recounts the torturous pains of growing up in the early years of modern China. With his family’s fortune destroyed, he is left impoverished in a Nanjing slum and endures crippling starvation within the harsh confines of a Communist reform school, all set against the opulent decadence of the foreign “white ghosts” in British Hong Kong.

The Turbulent Sea recounts Li’s escape to America and the shocking, cruel racism he not only endured but observed nationwide. His fantasy of a fair and free United States is challenged by the behavior of law enforcement, government, and even his college peers whose permissive sexual mores and disregard for outsiders leaves young Charles with a heartbreaking feeling of disappointment and loneliness. As in the case of so many immigrants worldwide who are seeking a better life, his myriad challenges include staying at the top of his class while struggling with financial hardships. He can’t even afford a winter coat in the middle of Maine’s brutal snowstorms, and perhaps more heartbreaking, no one seems to notice or care.

Growing steadily more involved in the antiwar movement, Li, having suffered in Mao’s China, becomes a dissident among his cohorts for holding the view that Mao was the diametrical opposite of a revolutionary hero. Yet, for his pacifist and law-abiding protest activities, Li is persecuted by the American law enforcement and immigration authorities.

Li’s intellectual and psychological journey at Bowdoin College, Stanford University and the University of California, Berkeley, is triumphant as he finds a group of talented friends who provide, at last, an opportunity for the love and care that eluded him for so long.

Riveting, witty and illuminating, The Turbulent Sea is also an unconventional history of America’s 1960s from the perspective of a brilliant, quintessential outsider.

Charles Li is Emeritus Professor of Linguistics and former Dean of the Graduate Division (1989-2006) at the University of California, Santa Barbara. An author and editor of numerous linguistics books and articles, Li’s memoir of the first twenty years of his life, The Bitter Sea: Coming of Age in a China before Mao, received wide critical acclaim. The book was chosen by Baruch College of the City University of New York as required reading for the 2010 Freshman Class and was adapted for the stage at the Baruch Performing Arts Center. In 2017, an NPR podcast featured the book. He is married to Katherine Saltzman Li, a UC Professor of Japanese Literature.

“A soul-searching sequel to a riveting memoir about wartime China, The Turbulent  Sea chronicles the author’s unforgettable ordeal in the crucible of America. At once  lyrical and realistic, it is a deep dive into the inner world of a fiercely gentle spirit  searching for meaning, and a loving album of friendship, camaraderie, and love.”

“No ordinary sixties coming-of-age story.... evocative... brilliantly crafted… transports us from the prison camps of China, to the slums of Hong Kong, to the beckoning frontiers of President Kennedy’s United States. We suffer with Li... and witness him becoming a bright light of the antiwar movement while cautioning American radicals against the lure of Maoism. Along the way, we meet memorably limned individuals who  transform his life—and the course of history."