Robert Smalls: Tales of the Talented Tenth, no. 3 (Paperback) 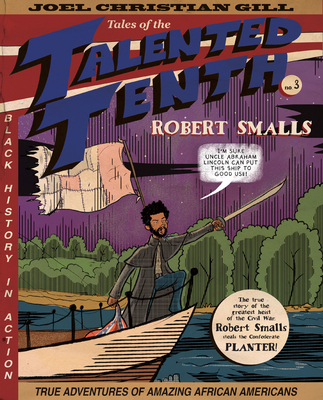 "Joel Christian Gills shows how ordinary people fight for our collective liberation and whose stories are not often at the forefront of our historical consciousness.” —Ibram X. Kendi, author of How to Be an Antiracist

Do you know the story of the slave who sailed himself to freedom? For the third book in the bestselling Tales of the Talented Tenth series, Joel Christian Gill brings Robert Smalls to life by telling the true story of the enslaved African who pulled off one of the most daring and largest heists of the Civil War. Come along for the adventure as Robert earns a job working for the C.S.S. Planter, escapes to freedom, goes on to become a first-generation Black politician, and makes history by writing and leading the passage of legislation that led to the United States’ first free and compulsory public school system.

Tales of the Talented Tenth is a historical comic series that focuses on the adventures of amazing African Americans in action.

Joel Christian Gill is the inaugural chair of Boston University’s Master of Fine Arts (MFA) in Visual Narrative and associate professor in the CFA School of Visual Arts. He is the author of the acclaimed memoir Fights: One Boy's Triumph Over Violence, cited as one of the best graphic novels of 2020 by the New York Times and for which he was awarded the 2021 Cartoonist Studio Prize. He wrote and illustrated Fast Enough: Bessie Stringfield’s First Ride and the award-winning graphic novel series Strange Fruit: Uncelebrated Narratives from Black History, as well as three volumes of Tales of The Talented Tenth. He has just completed the graphic novel of Ibram Kendi's National Book Award–winning Stamped from the Beginning: The Definitive History of Racist Ideas in America, forthcoming in June 2023. Gill has dedicated his life to creating stories to build connections with readers through empathy, compassion, and, ultimately, humanity.

Qiana Whitted is a professor of English and African American studies at the University of South Carolina. She is the author of the Eisner Award-winning book EC Comics: Race, Shock, and Social Protest.

For the Tales of the Talented Tenth series: "Joel Christian Gill is a modern day graphic griot. His mastery of visual storytelling coupled with his tireless research make him one of the most important artist/scholars working today." —John Jennings, Eisner-nominated comics scholar and award-winning graphic novelist

"Joel Christian Gill gives Robert Smalls the adventure genre treatment that he deserves. We need so much more of what Gill consistently delivers." —Rebecca Wanzo, author of The Content of Our Caricature: African American Comic Art and Political Belonging

“Tales of the Talented Tenth is a testament, in the words of W. E. B. Du Bois, that everyday Black people stand under the sun, with bravery and courage, to represent us. Joel Christian Gills shows how ordinary people fight for our collective liberation and whose stories are not often at the forefront of our historical consciousness.” —Ibram X. Kendi, author of How to Be an Antiracist